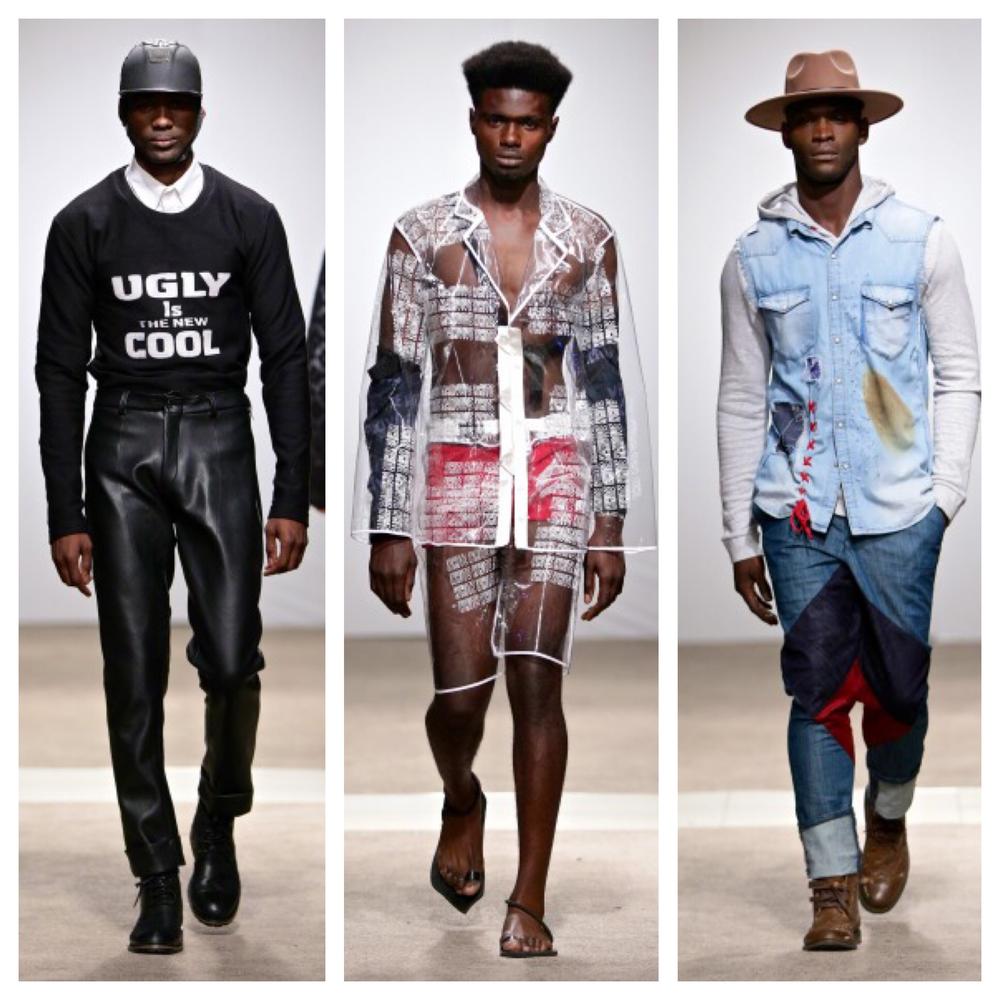 It felt good to see that the Nigerian designers who showcased at the South Africa Menswear Week for the A/W 2017 season were very much in touch with the times. It felt like an actual reality show. But how much of reality shows are real? The collections were a genuine reaction to current happenings or a reflection of self, and not scripted like those aforementioned shows.

The collection by Tokyo James was one of the most politically charged shows. When he first sent in his inspiration, I assumed it was going to be one of those dystopian-themed shows a la Mad Max, or current cinema’s affixation with post-apocalyptic movies. But his show was sort of a charge. To prepare us for battle. To stand against impending doom. Hence, there was a lot of black. 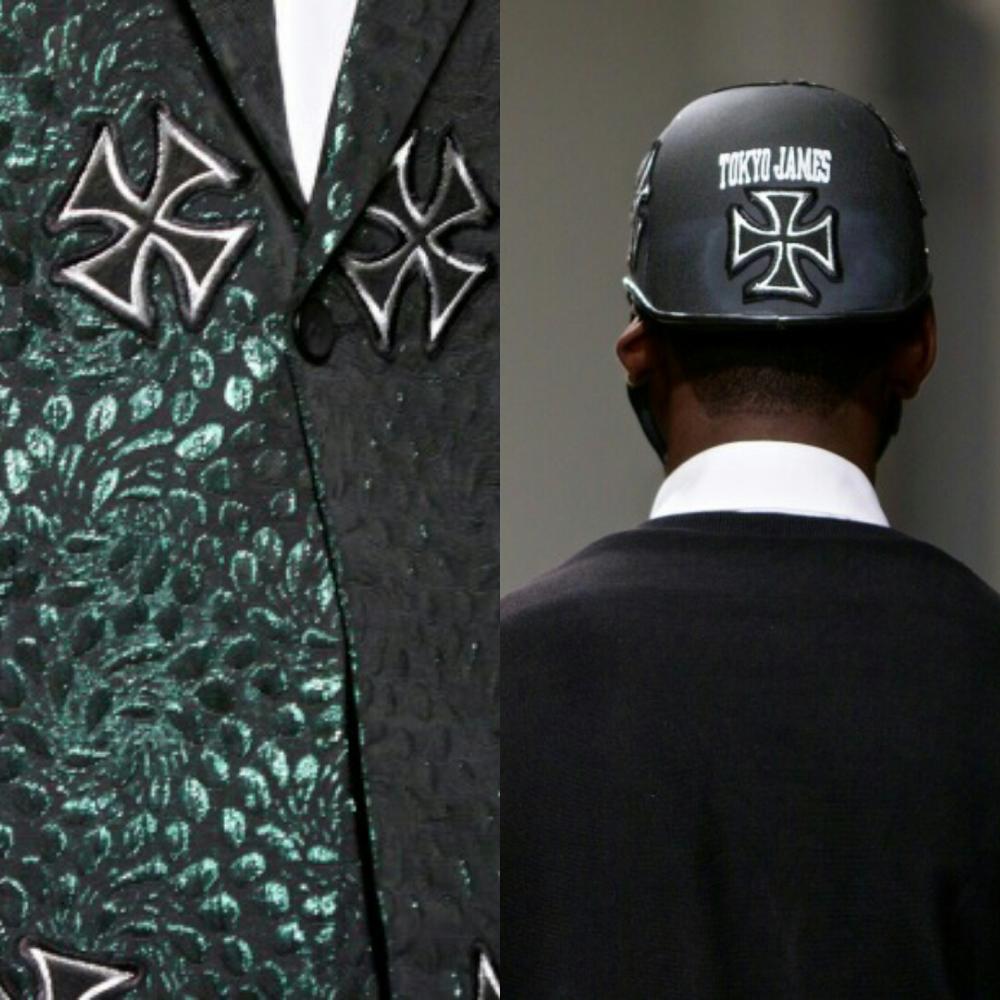 It may have come off as cliche, but better a well-focused collection than an ‘inspired’ pretentious one. There were sumptuous leathers that were cut into roomy jackets and coats or rich emerald brocade suits with embroidered goth-style crosses. All of this tailoring was accessorized by cross-embossed helmets and toughened up by boots that was the result of a collaboration with Steve Madden South Africa. It was a job well-done by the designer and stylist. 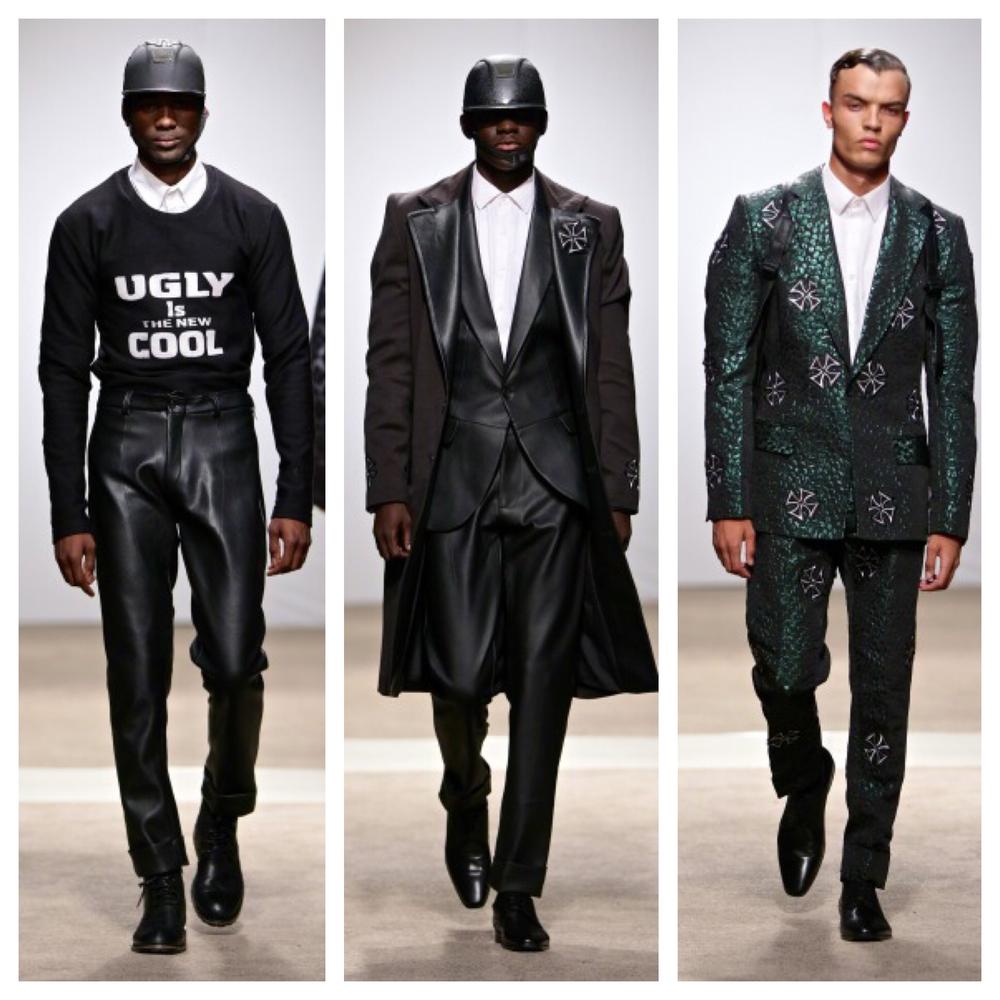 Anyone who knows Mai Atafo knows that he loves a suit. He makes men want to look like men. He’s probably Nigeria’s answer to Tom Ford. Be it a double-breasted houndstooth suit or a three piece corduroy set in a vibrant shade of wine (looks 13 and 12), he’s no slouch in the tailoring department. So for this reviewer, when tie-dye denim with graffiti-style hand-painting decorated some of the opening looks, it was a surprise. 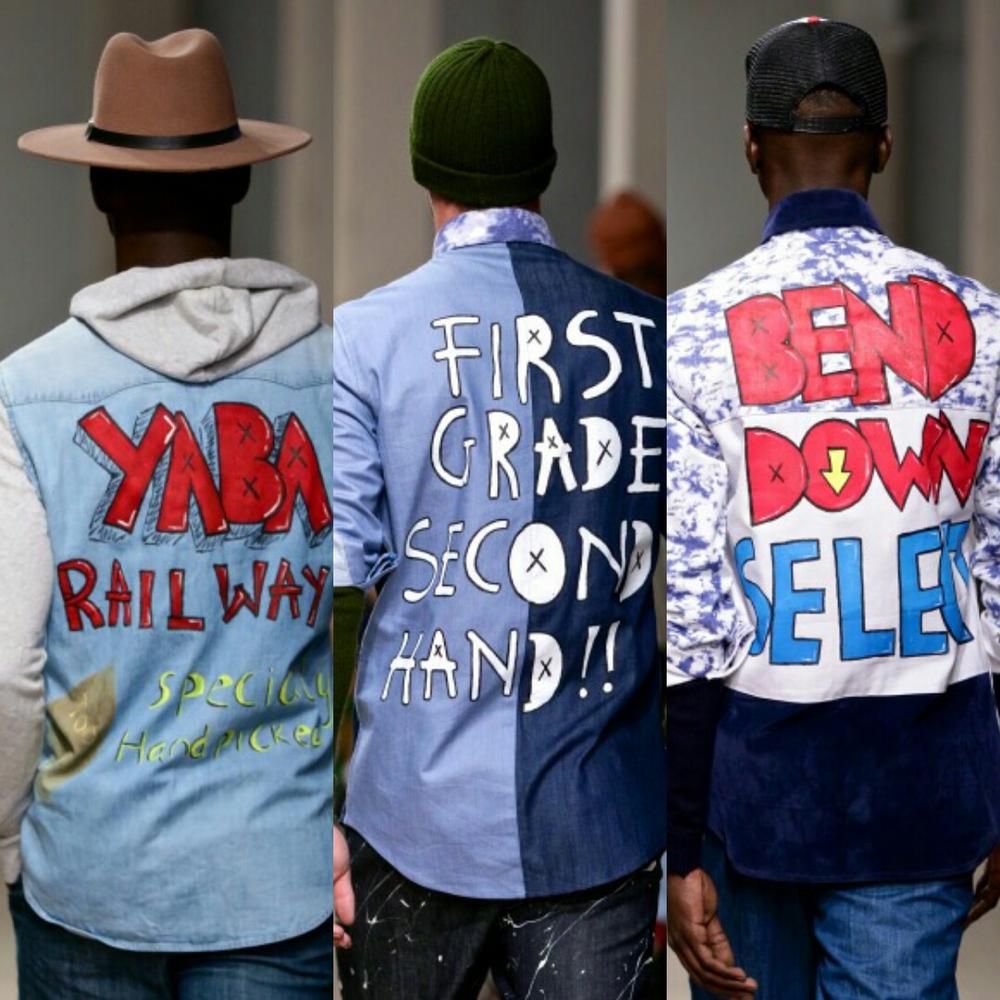 Mai called his collection ‘Me!’. Nostalgia was his starting point. He reminisced about his early years (19 to be precise) when his brothers would give him hand-me-downs or how he’ll shop second grade clothes (hence the Yaba market lingo drawn on the denim). It was great to see youth on his runway, and even greater to know that he collaborated with some bright young things. Dricky did the painting. Veronica Shokoya did the knits. The only critique would be that the transitioning link between the 2 stories wasn’t present. Otherwise, this was one of Mai’s best collections to date. 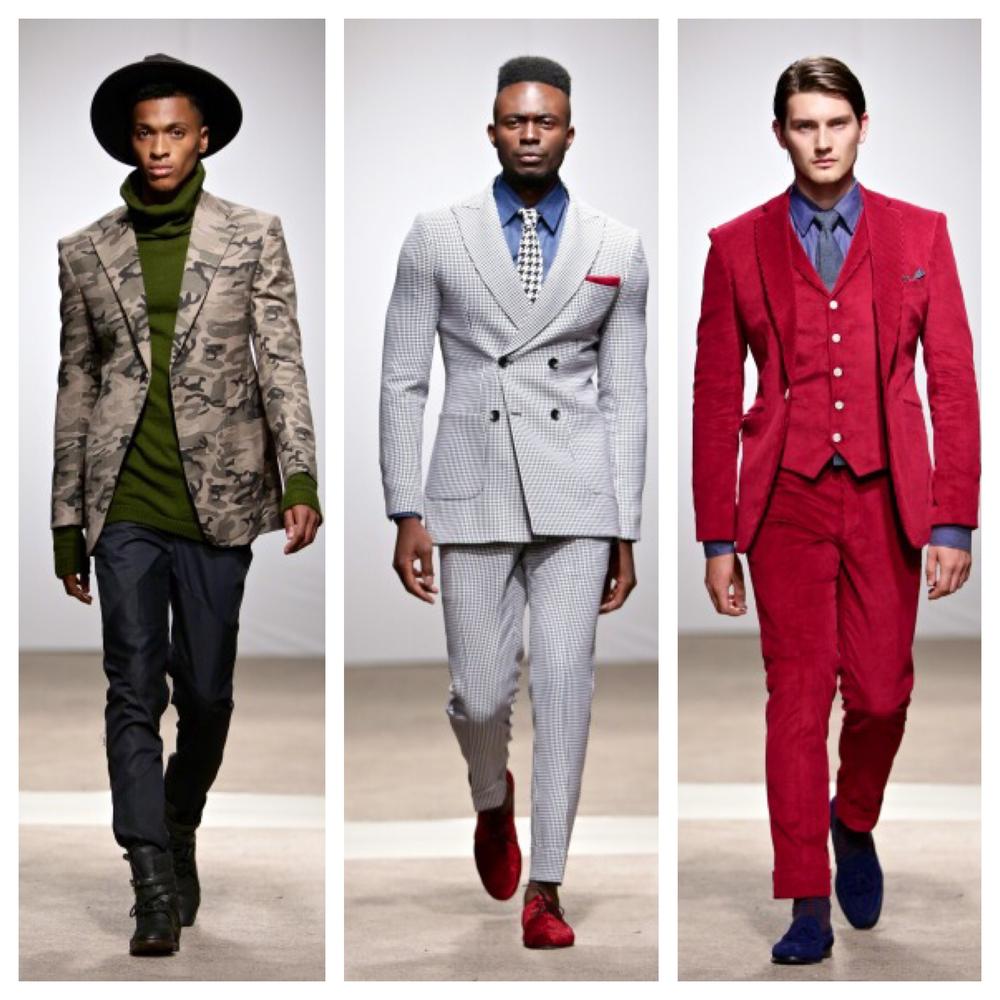 Someone who also went the political route was Emmanuel Okoro of the Emmykasbit label. He called his latest offering ‘Expedition: Men on a journey to liberation’. For the collection, he drew inspiration from Sub-Saharan nomads. But the undercurrent of the show spoke to a much greater cause, particularly at a time when there are protests going on by immigrants in the Trump-led America. 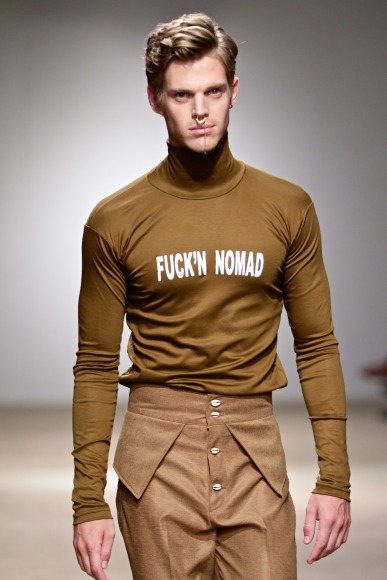 In some way, aren’t we all nomads? If we decide to, we can move from place to place without question. Except now, that movement is subject to questioning. That’s why even with the idea of freedom, rebellion is inevitable. Hence the ‘we r all Fuck’n nomads’ written on some sweatshirts. Colors were tonal browns and greens that were sometimes layered or gave off the idea of layering via trompe l’oeil tailoring. This was a fair effort, but Okoro is talented enough to push the idea even further. 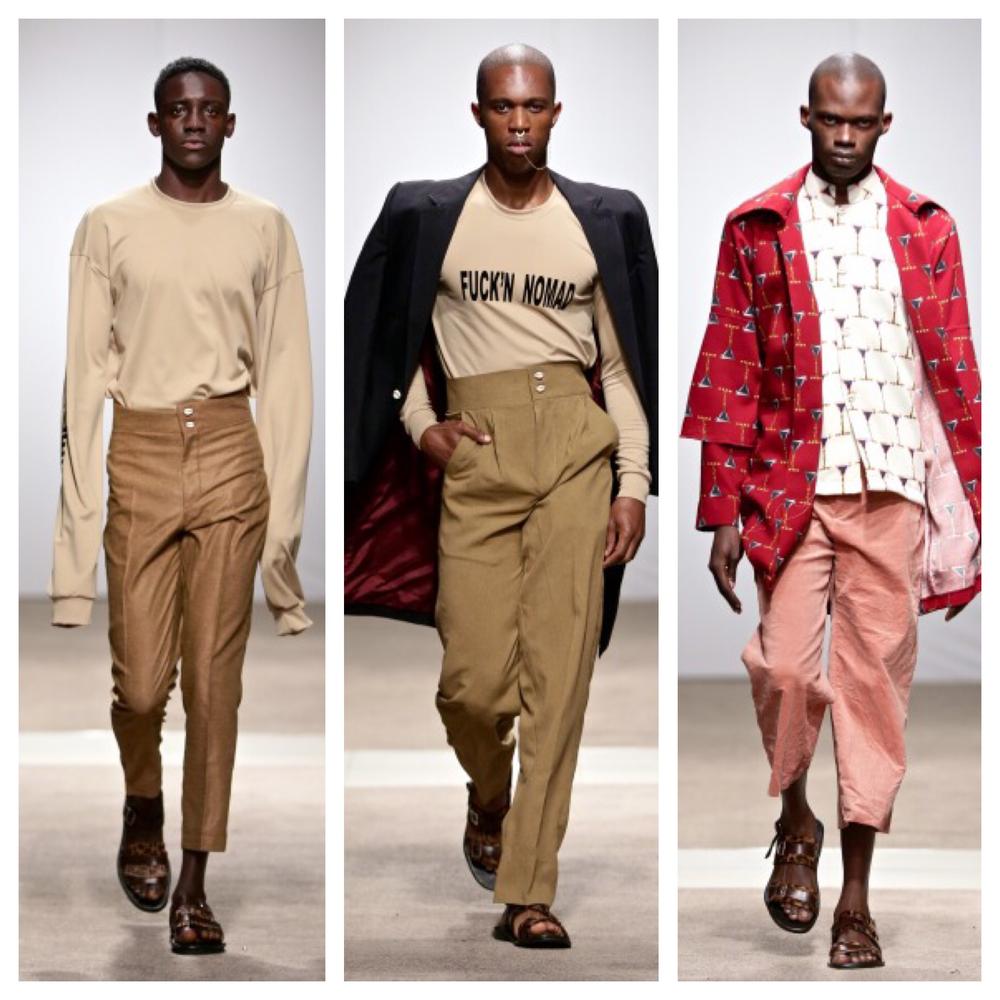 Finally there was Babatunde ‘Papa’ Oyeyemi‘s experimental Maxivive brand. His ‘white white Maxivive white’ collection was centered around the idea of wetness of the body, both internally and externally: how the body’s composition is 70% water and how we use water in our daily lives (for bathing, for drinking) and also the feeling of rain drops on our skin. White in this case is a metaphor for purity. But how did this all translate into clothes? There was the obvious: transparent nylon/PVC jackets and iridescent water-proof fabrics created with stormy days in mind. 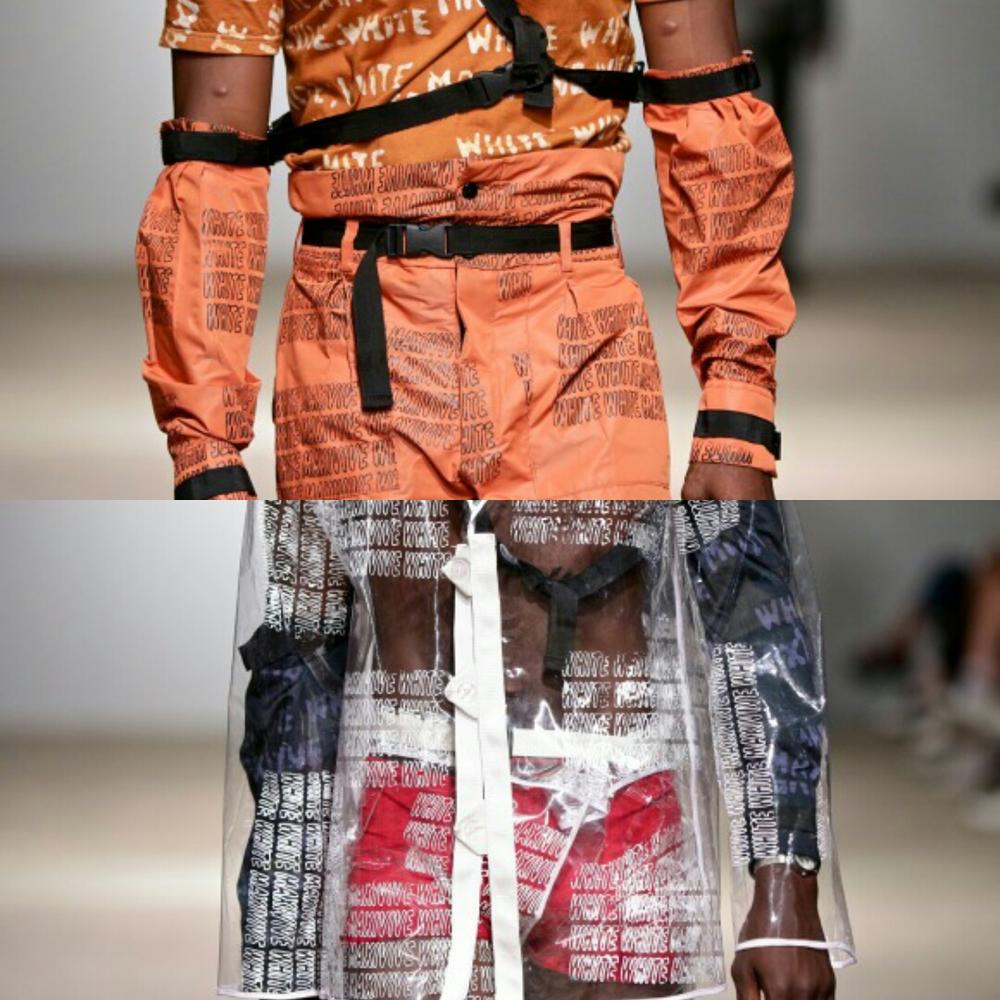 There was the not so obvious: harnesses created by interlocking buckles made to mimic the flow of water in the body, as shown in an orange look with attached truncated sleeves. The fluidity of water was represented as gender-fluid garments, such as crop tops or pants with wing-like panels. It was a lot to take in, but it just goes to show how truly talented Mr Oyeyemi is. 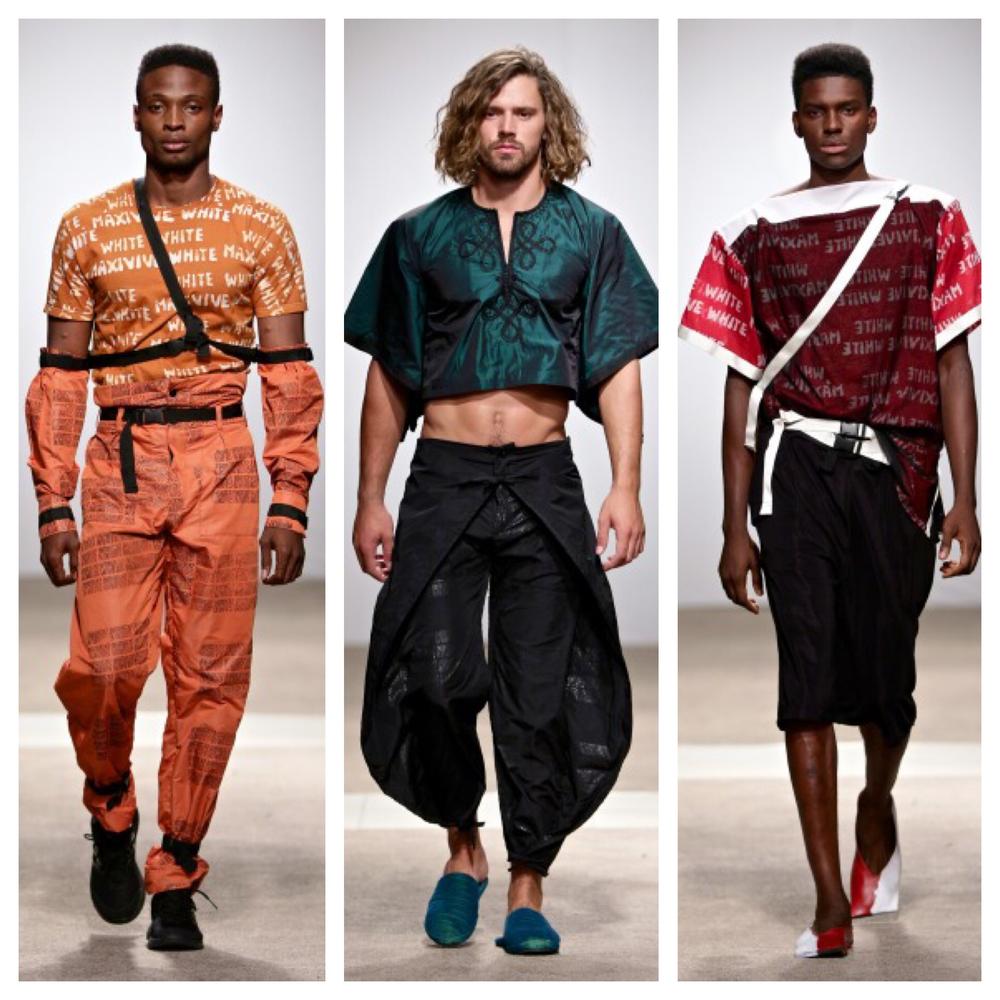 All in all, the collections were a testament to how in-tune fashion is to happenings in the world at large, incase there be any naysayers who still refer to fashion as shallow. That’s what I’m most proud of.