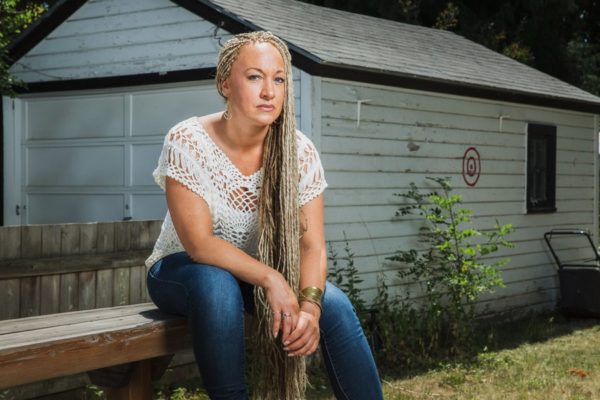 Rachel, a part-time professor of African Studies at Eastern Washington University was forced to step down from her positions in 2015 when it was discovered she had been claiming to be black when she was born Caucasian. Read about it here.

She was first exposed in a local TV interview after she claimed her and her sons were the victims of a hate crime, the reporter asked routine questions about the incident, then confronted her with a photo of her white father. When she started looking puzzled, he asked her if she’s African-American.

She replied, “I don’t understand the question.”

When asked if her parents were white, she mumbled, “I refuse …” and walked off.

Rachel’s parents – Ruthanne and Larry – married for 41 years, made the move to expose her.

They spoke to press and released her birth certificate with their names on it, as well as photos of her growing up – she was a blonde hair, blue eyed girl.

Rachel’s parents had said that they are Czech, Swedish and German, with only ‘faint traces’ of Native American heritage. Although Rachel attended a HBCU (Historically Black College/University) – Howard University for her Masters, her parents claimed she is not black at all.

Rachel changed her name in a Washington court in October according to legal documents.

Nkechi, which is the short form of Nkechinyere originates from the Igbo ethnic group in South East Nigeria and means “What God has given”, “Gift of God” or “God’s own”.

Amare is said to be of Ethiopian origin, and it means “Handsome”, or “Good-looking”.

Diallo, meaning ‘Bold,’ is a last name of Fula origin, a Muslim ethnic group said to have roots in the Middle East and North Africa, and are now widely dispersed across West Africa.

Nkechi recently told The Guardian UK that since the revelation about her race in 2015, she’s been finding it difficult to get a job to provide for herself and her three children.

One of her friends is said to have helped her pay two months rent and she said she expects to be homeless after that.

#SMWxBNStyle: It’s Today! Get the Details on the BellaNaija Style Panels at Social Media Week Lagos 2017