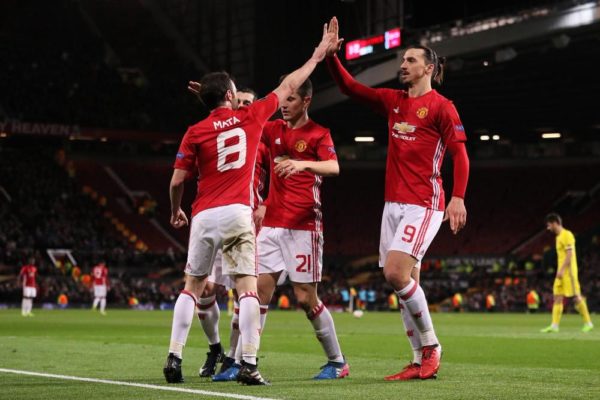 Manchester United progressed to the last eight of the Europa League after Juan Mata‘s goal secured a 1-0 win over Rostov at Old Trafford.

The result means they are now unbeaten in the last twenty-three home games in Europe with the last defeat coming against Real Madrid in 2013.

There is only one team in Manchester left in a continental competition, and now have a quarterfinal to look forward to courtesy of an eye-catching Mata’s goal.

The Europa League is looking Manchester United’s likeliest route back into the Champions League and they advanced, not in a manner to justify their billing as the tournament favourites, but having negotiated another obstacle in the form of Rostov.

Jose Mourinho‘s side were held 1-1 in Russia and were wasteful in front of goal for much of the match at Old Trafford. The match looked to be heading for a goalless stalemate before Mata struck home 20 minutes from time at the end of a well-worked move from the hosts.

They remain on course to win two trophies and play 64 games this season. Should they do both, this may be among the more forgettable evenings. It at least illustrated the enduring importance of Juan Mata, who went unused as they exited the FA Cup to his former club Chelsea and turned match-winner on his return.

The win was far from the most entertaining game ever seen in the Europa League, but one moment stood out for fans at the ground and watching at home.

With less than 20 minutes remaining, manager Jose Mourinho handed a banana to Ashley Young to pass to Marcos Rojo who needed extra energy and ate it on the pitch.

The unusual eating habits of the Argentine defender got Twitter very excited, with one fan praising Rojo’s laddishness!

Nigerian Army To Organize “Marathon For Peace” In Borno