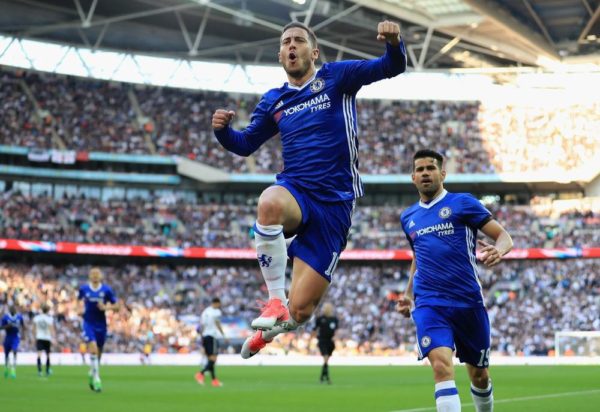 Tottenham‘s Emirates FA Cup run ended at the Wembley Stadium after shipping in four goals against arch-rival Chelsea on Saturday.

Chelsea led twice but the London neighbours always found a way to keep the score level. Brazilian Willian opened the scoring for Chelsea in the fifth minute through a well-taken free-kick, but Harry Kane scored the equalizer 12 minutes later.

In the 42nd minute, a foul by Tottenham against Victor Moses inside the box 18 gifted Willian his second goal of the day from a penalty kick. Seven minutes after the second half resumed, Dele Alli replied with a goal to put the scoreline level.

There was a tribute paid to Ugo Ehiogu before the match after the Spurs Under-23 coach passed away having suffered a cardiac arrest yesterday.

Antonio Conte, whose name adorned a banner trailing a light aircraft flown over the stadium, sprung a surprise when he left Hazard and Diego Costa on the bench, but Willian made the most of his inclusion with two goals before the half-time break.

Tottenham have now lost 7 FA Cup semi-finals in a row: two against Chelsea and Arsenal respectively, and one each against Newcastle, Everton and Portsmouth.