The Big Brother Naija Reality TV Show ended more than a week ago but the events in the house are still creating discussions on social media, particularly the disqualification of one housemate – Kemen – who was seen on camera groping another housemate – TBoss – while she was sleeping.

At AY Live 2017, Comedian AY joked about it event and asked Nigerians to forgive Kemen, adding that men will understand the power of sexual urge.

AY was slammed on social media over his comments. Read about it HERE and HERE.

Bovi, whose annual show “Bovi Man on Fire” is a couple of days away, took to his twitter page to make the announcement.

People got into his mentions to warn him about not joking about rape, disabilities, and the just concluded Big Brother Naija Reality TV show.

Bovi, in another tweet said a comedian can joke about anything, provided it doesn’t offend sensibilities.

See tweets and his replies: 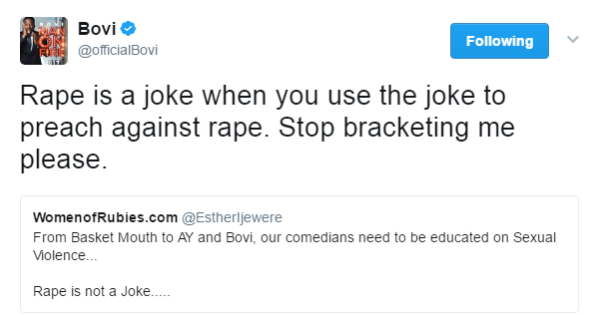 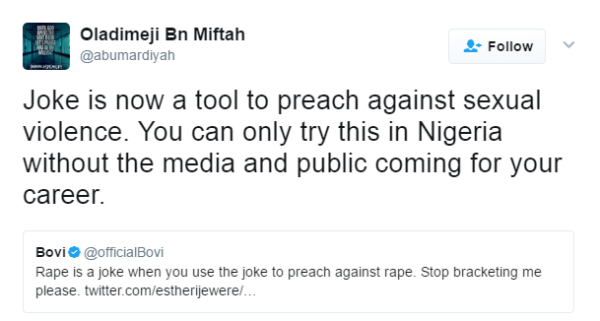 In the end, Bovi shared a video clip of how joking about rape was a tool he used to preach against rape in 2014.

those people attacking me that I can’t make a joke about rape, remember, comedy is a corrective tool too. Watch this from #bovimanonfire2014 pic.twitter.com/hPCfdK6oQ9