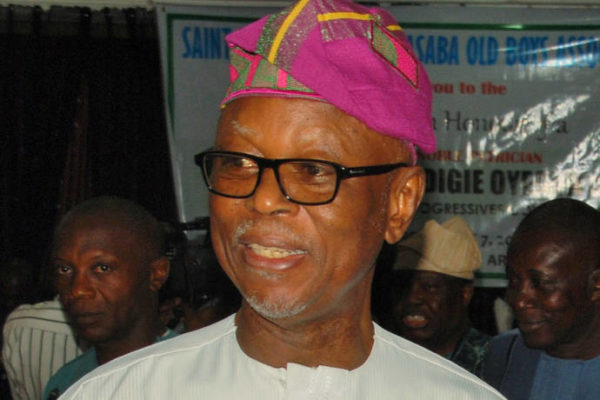 John Oyegun, the Chairman of the All Progressives Congress (APC) has called for a ceasefire between the legislature and executive.

Oyegun made this known when the National Working Committee of APC visited the Senate Caucus of the party on Tuesday in Abuja.

Oyegun, who spoke to newsmen after about five hours of closed door meeting  called on the Senate and the executive  to cease fire over  recent  misunderstanding  between them.

He asked  for  mutual respect between the various arms of government to ensure sustainable development. .

“One appeal I have to make (is) that it is necessary is for all levels of government to maintain some level of respect and civility. And I appeal that as we start now the process of reconstructing relationships and consultations.

There should be what I will call a ceasefire in terms of the kind of abuse that is used all round on one institution of government or the other even principal parties of these institutions,’’ he said.

He expressed  optimism that though the meeting with the caucus was the first, such interactions will continue for the strengthening of the party and national development.

While commending the leaders of the National Assembly for speaking with one voice after meeting with President Muhammadu  Buhari on Monday,  he urged them to continue in that spirit for the entrenchment of democracy in the country.

He further commended the National Assembly for carrying out its constitutional duties in spite of the crises.

The report I get, or the briefing I get from the Minister of Budget is that the National Assembly has been very cooperative in the interactions between both his ministry and other ministries.

I want to pay tribute to the National Assembly for the degree of cooperation that they have been extending to the executive in spite of seeming differences on the surface.

Secondly, I want to say that we have now completed our consultations with the National Assembly and we are going to move forward from now.

Once that is done, I can assure you and assure the nation that in the next couple of weeks, we will have a new level of cohesion, cooperation and mutual respect between the different arms of government and the party,’’ said.

The President of the Senate, Dr. Bukola Saraki, called for mutual respect among the different arms of government.

“Whether there are issues or not, regular consultations between the legislative arm of government and the party is important.

It is unfortunate, but the most important thing is that a lot of stakeholders must respect this institution.

This institution is here now and is going to be there after now. So we should not allow our selfish interests  to bring ridicule to the institution. The institution is what we have and we must ensure that we respect that,’’ he said.

He said the senate will not relent in carrying out its constitutional duties, adding that “as I said yesterday, some of these issues are not important to our people.

“The important issues are issues of budget. Despite all the noise you heard last week, we still passed an amendment to the INEC law that had been there for over six or seven years.

By this time next week, our Committee on Petroleum will lay the PIB which has never been done. We are focused on the major issues and we are not going to be distracted on that. We are still going to do our work.

Today we were talking about meningitis, looking at how we are going to find funding for that. So, none of these issues are distracting us from that and I think we have shown that over the last few weeks,’’  he said.

Saraki declined comment on the suspension of Senator Ali Ndume (APC-Borno) by the Senate. He said: “let us focus on national issues.’’