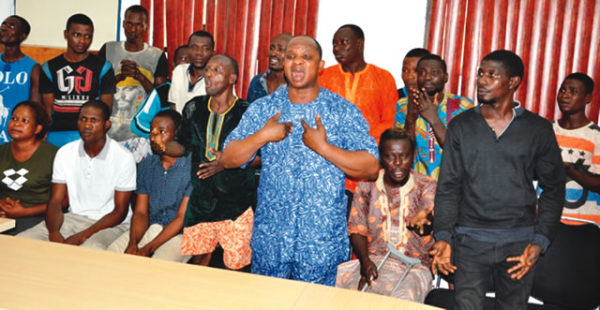 Following the clash between Hausas and Yorubas in Ile-Ife, Osun state and the subsequent arrest of suspects, traditional rulers in the South-west has condemned the arrest of only Yoruba suspects, adding that it is wrong to arrest a particular group and leave the other group, PUNCH reports.

The suspects, numbering 20, including a traditional ruler, were paraded at the Force headquarters in the Federal Capital Territory.

About 46 persons reportedly died in the clash.

The traditional rulers also warned the President Muhammadu Buhari-led administration and the Inspector-General of Police Ibrahim Idris, against the one-sided arrests, adding that it is capable of aggravating the situation.

Peace has since been restored to the Sabo area of Ile-Ife, where the clash started and normal activities have begun.

Here’s what the monarchs had to say:

It is when you introduce ethnic bias that the problem festers. When the arrests are one-sided, it raises tension.

The security agencies should do their work dispassionately. Nigeria is facing a lot of challenges presently and we should not add ethnicity to that.

However, two sides were involved in this fracas, so there was no way only people from one side should have been arrested.

What was behind the idea of parading of 20 Yoruba persons in Abuja? How many Fulani herdsmen have been paraded over there? All these issues raise questions.

Even in my domain, I have herdsmen causing problems all over the place. I hope the IGP will look into this. They should not let people have the impression that the Nigeria Police, that is funded with public funds, is taking sides.

Whoever will act as a mediator must be neutral and this is where the police come in. We were not there to see what happened when the crisis began but from what we have heard and read in the media, the police took sides, which is wrong.

The police should do a thorough job because one side cannot fight against itself.

They should be fair and ensure justice. There should be no sacred cow; those who violated the law should be arrested.

We must not be partial in dealing with this kind of matter. Whoever was involved in the crime should be arrested and prosecuted irrespective of their ethnic group.

The setting up of the panel of inquiry will enable everybody to know what transpired, how it happened and who the actors were.

The bias is condemnable and the actors from other sides should also be arrested and prosecuted.

“A kii fa’ri apa kan (It is not proper to shave one side of the head and leave the other unshaved).”

He, however, called on every party to exercise restraint so as to avoid aggravating the situation.

The Serving Overseer of the Latter Rain Assembly, Lagos, Pastor Tunde Bakare, had earlier in the week, condemned the one-sided arrests.

Legal practitioner and human rights activist Femi Falana also condemned the arrest of only people from the South-West.