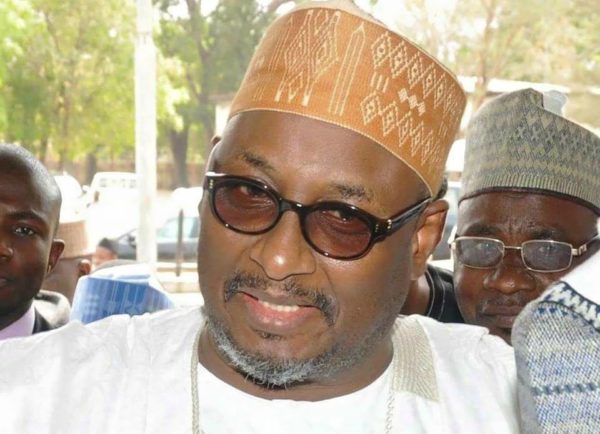 Former Bauchi Governor and ex Chairman of the People’s Democratic Party (PDP), Adamu Muazu, has released a statement on his “connection to No. 16 Osborne Road, Ikoyi, Lagos” where $43.4m, £27,800, and N23.2m were found in one of the apartments.

My attention has been drawn to the news making the rounds that I own the building on No. 16 Osborne Road, Ikoyi, Lagos. I want to state clearly that I built the said property and sold to prospective buyers of individual flats.

I have been a property developer since 1983 and I have developed and sold several properties all over the world, the property in question happens to be one of them. I acquired the land and jointly develop it using a bank loan, I obtained about nine (9) years ago.

However all the flats have been sold to prospective buyers in order to pay back the loan. I do not own or occupy any of the apartments. I sold all the apartments through established estate agents as such I have no knowledge or interest in who purchases or rents any of the flats.

I commend the efforts of the official of the EFCC and the government’s drive at fighting corruption and also the media in informing the public on illicit and corrupt proceeds. My response is not intended to jeopardise or interfere with the ongoing investigation of the anti graft and security agencies but to clear the misconception that the house in question belongs to me. I strongly believe that the efforts being made will surely unveil the real owner of such flat and the monies recovered.

Muazu had in an earlier statement said:

It must be placed on record that H.E Ahmadu Adamu Mu’azu even before he assumed office as the democratically elected governor of Bauchi State, was a successful businessman with vast investments in property. How many of these change agents and emergency social commentators were landlords before they held government offices in 1999?

It is important also to note, that in a separate publication, the ‘owner’ of the ‘discovered ‘ money has been revealed and that person is not H.E Alhaji Ahmed Adamu Mu’azu.

H.E Alhaji Ahmed Adamu Mu’azu is not a ‘professional politician’ and does not nurse an insatiable hunger for power. His exploits as Executive Governor of Bauchi State are well documented ( including before and after pictures) in his book ‘My tenure report’ where he gives account for his stewardship to the good people of Bauchi State. Indeed Mu’azu is a living legend, haven transformed Bauchi State, from its semi rural state. It is on record that for a state with revenue less than what accrues to a local government in Lagos State, all road construction was executed by Julius Berger under his watch. His feat in rural electrification remains unequalled even today. In health care delivery, education and agriculture,and infrastructural development his records are there to be seen. Ahmed Adamu Mu’azu goes down in history as the architect of modern day Bauchi State.

It is therefore no surprise, that some disgruntled elements, in anticipation of Muazu’s future political aspirations, could not resist the temptation of attempting to malign his good name in the slanderous press releases of yesterday.

As Chairman of The PDP, Alhaji Ahmadu Mu’azu, in the buildup to the 2015 elections refused to go into the pigsty with the then opposition apc as they engaged in the most divisive campaigns in Nigerian political history. Alhaji Mu’azu has proved to be a most honorable man, urbane, cosmopolitan,eminently qualified,a man with clear vision, impeccable taste, a detribalized Nigerian, who is not a religious bigot. Alhaji Muazu is a bridge builder and a game changer.

Related Topics:Adamu MuazuEconomic and Financial Crimes Commission (EFCC)
Up Next