Lagos Teen's Friend "Mistakenly" Bathed her with Acid on her Birthday 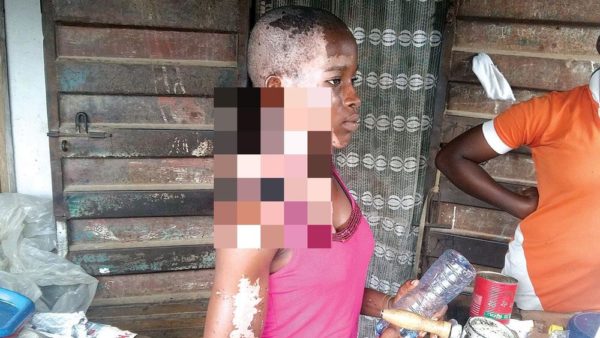 Fourteen year old Victoria Emmanuel was bathed with acid on March 29, 2017 while she and her friends were celebrating her birthday by pouring water on her.

One of her friends, Moshood Yusuf, 13 was said to have emptied the contents of a bottle which he got from a nearby shop on her.

Victoria, who lives with her parents at No. 1, Baba Elegbe Street, Mafoluku, said that she had warned him not to pour the contents of the bottle on her since they didn’t know what it was.

According to The Guardian, Moshood said he thought it was a water disinfectant known as Izaal.

Victoria added that another boy, Ganiyu claimed that Moshood had told him that he (Moshood) was planning to hurt her.

“It was my birthday. I had gone to fetch water at the night market when my friends stopped me on the road and started pouring the water on me to celebrate my birthday. Some were pouring dirty water on me and others were pouring sand. That was how Moshood ran into Iyawo pastor’s shop and brought out a container. There was something inside and I told him not to pour it on me because we didn’t know what was in it.

He opened it and said it was smelling like chemical. We told him again that he shouldn’t pour it on me but he didn’t listen. As I walked pass him, he poured the content on my body from behind. I screamed and ran towards the tap but he got there before me and opened it so that water would pour on my body. While I was under the tap, the woman who owned the place chased us away that I was wasting her water. That was the last thing I remembered. I was later told that I fainted and was rushed to the hospital.

Although one Ganiyu claimed that he told him he was going to hurt me, I don’t know if it is true. He insisted that he thought it was Izaal that was inside, but the shop owner has denied keeping any acid in her shop. The woman was crying and swearing that she didn’t keep anything like that since she has little children, who could have easily gotten to it,” Victoria narrated.

Victoria was rushed to the Lagos State University Teaching Hospital (LASUTH), where she is currently receiving treatment.

Moshood’s parents were at Victoria’s parents residence to appeal for peace, adding that it was a mistake. According to his mother Ganiyat Yusuf;

“It was just a mistake. In fact, Moshood also got burnt by the acid on his chest and leg. He didn’t know the content of the bottle and since they were jubilating, he poured it on her without knowing. It’s a regrettable mistake. But what we want is for peace to reign. We don’t want a situation where both families would start fighting over it or the two children becoming enemies.”

Victoria’s mother Chidinma Emmanuel also said that her family also want peace, adding that they want the medical expenses to be reimbursed.