Ooni of Ife Impersonator Confesses to Defrauding 2 U.S.-based Nigerian Women who Wanted to be his "Queen" 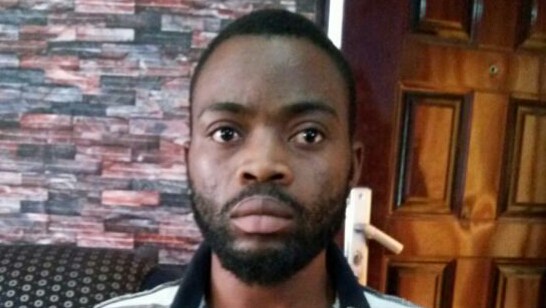 Premium Times reports that Joseph was arrested last Wednesday at Ilese, in Ijebu North East Local Government Area and confessed to defrauding two U.S.-based Nigerian women of N600,000 after he promised to marry them.

The State’s Commissioner of Police, Ahmed Illyasu, told journalists that the suspect had opened a Facebook account with the name and picture of the monarch, which he used to defraud his victims.

“I knew that Ooni was popular that was why I uploaded his picture.

Barely few days after I opened the Facebook account, many people, mostly ladies started to send me friend requests. Many of them said I have good looks and they said they wanted to be my ‘Oloris’ (wives).

But in our chats, I told them that they have to pay some money if they are really interested in being my Oloris. Two of them based in the United States of America sent some money totalling N600,000 to me through money transfer mode.

According to Joseph, one of the women requested that he buys her a N45m house. He said that he told her to send N5m and he will add the balance, adding that he was still expecting the money before he was arrested.

“I regret my action, most especially using the name and pictures of the Ooni to perpetuate fraud. I seek for his forgiveness,” he said.

Senator Adeleke May have Died of Overdose of Painkillers – Sources