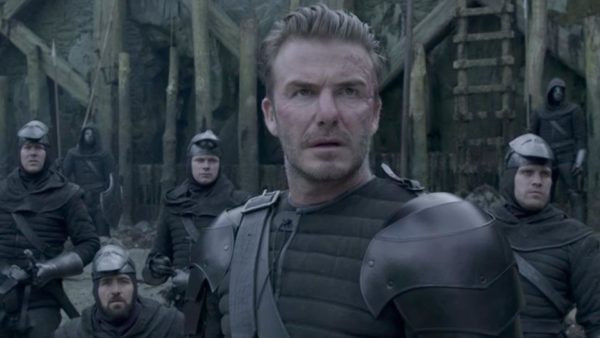 The film is a 2017 fantasy movie directed by Guy Ritchie and written by Ritchie, Joby Harold, and Lionel Wigram. Ritchie who enjoyed Beckham’s contribution has given the former soccer star the thumbs up for his performance. But the British newspapers and some fans have different opinions and they gave the star poor reviews for his role.

“I love him and I think he’s great on screen. I find him very talented,” Ritchie said at the film’s European premiere.

Ritchie’s take on the medieval legend follows King Arthur, played by Charlie Hunnam, who is robbed of his birthright and has a tough upbringing. But once he pulls the Excalibur sword from the stone, he is forced to acknowledge his true legacy.

According to The Sun, Beckham played the soldier Trigger in the sword pulling scene.

The Telegraph said in its review that Beckham “shows just about enough dramatic range to have played the stone the sword got stuck in,” adding that he had “sabotaged” the scene.

“It’s a misguided, fist-biter of a performance,” Empire said in its own review.

Piers Morgan described him as acting like “the third Mitchell brother” on Good Morning Britain show.

Despite the reviews, Beckham, however, seemed to enjoy his role describing how nice it was to be involved.

“I think people are going to love it. You know obviously with Guy’s movies you know what you’re going to get but there’s a few surprises, a bit of comedy along the way,” said Beckham, who attended the premiere with his son Brooklyn.

The film, distributed by Warner Bros, began its global rollout in some countries on Wednesday and hits North American cinemas on Friday.

See photos of celebs as they hit the black carpet for the premiere of King Arthur: Legend of the Sword in California