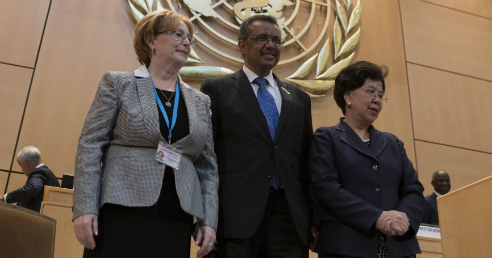 Dr Veronika Skvortsova, President of the World Health Assembly and Minister of Healthcare of the Russian Federation (left), together with Dr Margaret Chan, WHO Director-General (right), after the election of Dr Tedros Adhanom Ghebreyesus (centre) as the next WHO Director-General.

The World Health Assembly, the decision-making body of the World Health Organisation (WHO), has elected Dr Tedros Adhanom Ghebreyesus of Ethiopia as the new Director-General of the world body.

WHO said in a statement following the afternoon vote that “Dr Tedros Adhanom Ghebreyesus was nominated by the Government of Ethiopia, and will begin his five-year term on July 1, 2017.”

He also served as Chair of the Global Fund and of the Roll Back Malaria (RBM) Partnership Board, where he secured “record funding” for the two organisations.

Ghebreyesus also created the Global Malaria Action Plan, which expanded RBM’s reach beyond Africa to Asia and Latin America, according to the UN agency.

The incoming health chief was chosen from among three nominees presented to the World Health Assembly. The two others were David Nabarro from the UK, and Sania Nishtar from Pakistan, in a process that began before September 2016.

Tedros will succeed Margaret Chan, who on Monday, addressed the World Health Assembly for the final time after serving two consecutive five-year terms.

In her final address as head of the global health organization, Chan urged WHO to “remember the people” behind the facts and figures.

The two-term WHO chief, who served for 10 years in office, took personal responsibility for the WHO’s delayed response in 2014 to the Ebola outbreak in West Africa.

Related Topics:Dr Tedros Adhanom GhebreyesusEthiopiaWorld Health Organisation (WHO)
Up Next