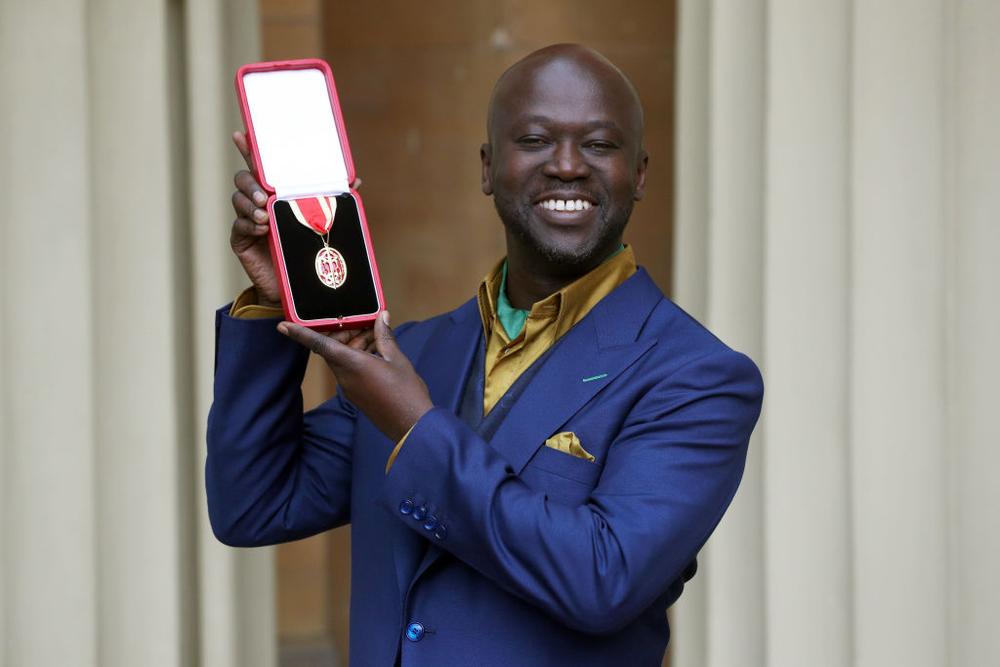 LONDON, ENGLAND – MAY 12: Sir David Adjaye poses after he was Knighted by the Duke of Cambridge during an Investiture ceremony at Buckingham Palace on May 12, 2017 in London, England. (Photo by Jonathan Brady – WPA Pool / Getty Images)

Renowned architect David Adjaye has been awarded with a Knighthood for his service to architecture. The investiture ceremony was performed by Prince William today.

Adjaye was born in Tanzania to Ghanaian parents. In 1994, he set up his first office, where his ingenious use of materials and his sculptural ability established him as an architect with an artist’s sensibility and vision.

He reformed his studio as Adjaye Associates in 2000 and immediately won several prestigious commissions all around the world.

Adjaye Associates now has offices in London and New York, with projects throughout the world. These include the Aishti Foundation shopping and cultural complex in Beirut (2015), the Alara concept store in Lagos (2014), and a new headquarters building for the International Finance Corporation in Dakar.

In September 2016, the architect celebrated his 50th birthday and completed the largest project in his career to date – the Smithsonian Institution’s National Museum of African American History & Culture on Washington DC’s National Mall.

Adjaye has taught at the Royal College of Art, where he had previously studied, and at the Architectural Association School in London, and has held distinguished professorships at the universities of Pennsylvania, Yale and Princeton. He is currently the John C. Portman Design Critic in Architecture at Harvard.

“I am truly honoured and humbled to receive a knighthood by Her Majesty the Queen for my contribution to architecture. I see this not as a personal celebration, but as a celebration of the vast potential – and responsibility – for architecture to effect positive social change. that we as architects have to bring something positive to the world. I am proud to continue to work in service of this mission as a global cultural ambassador for the UK.”

In an official statement The Central Chancery of the Orders of Knighthood at St. James’s Palace said:

“David Adjaye is recognised for his contribution to architecture and design. He is one of the leading architects of his generation and a global cultural ambassador for the UK. His designs include the Nobel Peace Centre in Oslo in the shell of a disused railway station and the Whitechapel Idea Store in London where he also pioneered a new approach to the provision of information services as well as the Museum of Contemporary Art in Denver and numerous private commissions. His most recent major achievement was the Smithsonian National Museum of African American History and Culture in Washington DC.”

The knighthood follows two previous royal awards received by David Adjaye – the 2016 Queen’s Birthday Honours in October 2016 and an Order of the British Empire (OBE) in 2007.

Congratulations to architect David Adjaye who has been awarded with a Knighthood for his services to architecture. pic.twitter.com/lu8fwOrYj9