Meet Ire Aderinokun, One of Three Google Developer Experts in Nigeria and our #BellaNaijaWCW this Week 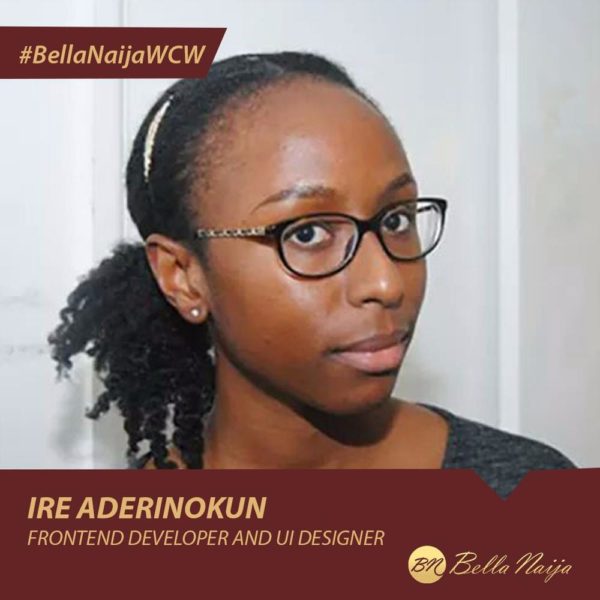 There are only three Google Developer Experts in Nigeria, and our Woman Crush Wednesday this week is one of them.

Ire Aderinokun is a Frontend Developer and User Interface designer. In simple terms, she is a website developer.

Not just that, Ire also runs a blog called bitsofcode, where she breaks down coding tips to other developers. She mainly shares findings from her research so that other developers can learn from them.

She started the blog in 2015 and has written scores of weekly articles which has not only put her name out there as she desired, but also made her one of the leading voices in web development in Nigeria.

Ire, a self-taught developer built her first website (although she called it awful) at age 13 as part of her Neopets (an online game) obsession.

Around that time (circa 2005), she knew she liked making websites, but it was not a viable career then, so she was talked out of it by her parents.

After her secondary education in Nigeria, she proceeded to the University of Bristol in the UK, and bagged a Bachelors degree in Experimental Psychology, albeit still making small graphic designs here and there.

Her interest rekindled when she met a friend who was pursuing a Computer Science degree in the UK. This was while she was in the middle of her Masters degree in Law.

She joined Codecademy (an online platform for intending developers) and continued to learn how to code as she pursued her Masters.

She went on to build several websites and started her blog to share her knowledge.

She was Head of Technology and Design at Big Cabal Media between 2015 and 2017.

Ire is adept at technical writing and breaking down complex concepts to be easily understood at all levels and loves to share her knowledge through her blog and speaking engagements all over the world.

Oyindamola Williams: You Don’t Need to Become an Entrepreneur to Build Your Dreams