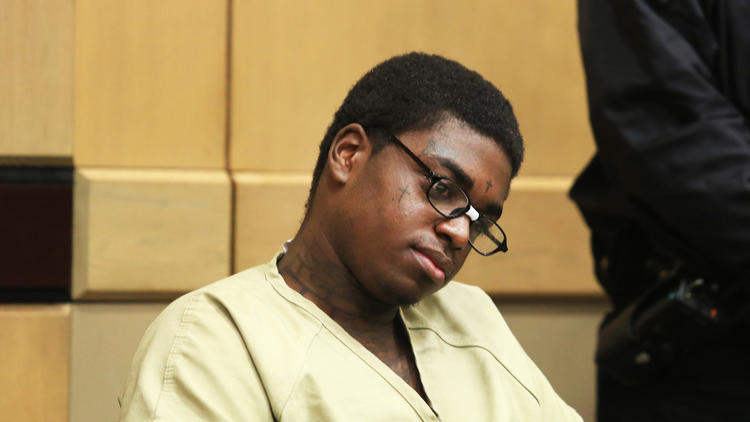 South Florida rapper Dieuson Octave, 19 popularly known as Kodak Black has been sentenced to 364 days in jail for violating his house arrest.

However if he completes a life skills course in jail he’ll get credit for time served and be out in about a month, The Sun Sentinel reports.

In 2016, Judge Lisa Porter sentenced Octave to one year of house arrest, with strict conditions, and five years of probation.

He violated the restriction on his movement after he visited a strip club on February 2, as well as a boxing match in Cincinnati on February 19, where he walked alongside fighter Adrien Broner to the ring.

He was also accused of assaulting a bartender after she told him to get off a bar.

Porter had spared Octave jail by acknowledging his rising success and potential as a musician, telling him he needs to keep working on his music and prove that he’s a productive and law-abiding member of society.

At a hearing in a Fort Lauderdale courtroom on Thursday, Octave pleaded with Broward County judge Michael Lynch who decided to give him a second chance.

“If you can find it in the kindness of your heart, your honor, I am asking you to give me a chance to prove my worth to the court. To be the person my community expects me to be. Depending on the outcome of this, it could be the beginning of my career, or the end of my career,” Octave told the judge.

According to ABC’s Local 10, the judge then ordered that Octave, 19, must complete an anger management/life skills course. If he completes the course successfully, his sentence will be commuted from 365 days to 180 days, with credit for time served. That means he could be back to making hits within weeks.

“We know we won’t let him down this time because Dieuson Octave, not Kodak Black, means so much more to us than him being a celebrity,” the rapper’s assistant,” Vanessa Antoine, said.

He apologized to his family, friends and fans for making repeated mistakes, and Michael Kushner from Atlantic Records said the label is willing to hire a full-time mentor and advisor to help counsel Octave.