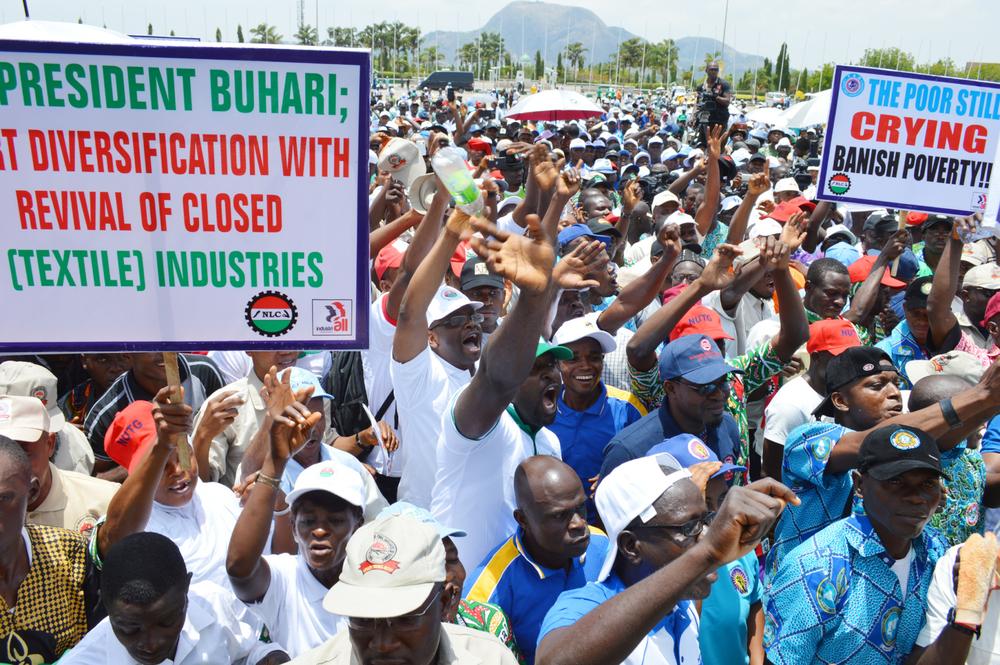 Angry workers protested against the Federal Government during the Workers’ Day celebration in Abuja over the non-implementation of minimum wage.

The workers, for close to one hour, barred government officials from delivering the speech from the federal government.

VIDEO: Nigerian workers clash with police during May Day rally in Abuja pic.twitter.com/nzS23BvFKd

VIDEO: How Saraki, Dogara and Ngige were embarrassed by angry Nigerian workers during May Day rally pic.twitter.com/640iuj5Dm8

The Minister of Labour and Employment, Dr Chris Ngige, blamed the disruption and protest on the Nigerian Labour Congress (NLC) faction.

Ngige told newsmen on the sideline of the celebration that what happened was as result of infiltration by non workers into the celebration venue and not necessarily workers anger about minimum wage.

He said that the workers had no reason to be angry with the present administration because it had been very friendly with them.

The Federal Government has been friendly to workers to the extent that it even went ahead and initiated the bailout fund.

No government has done that before and that was because we did not want to lay off any worker.

So what happened today is that some people who are not really workers infiltrated this arena and they started causing some problems.

We captured them in the 2016 budget but for some reasons the releases are not forthcoming but the president of the senate has assured us now.

So we are going to capture them in the 2017 budget appropriation and once it’s captured in the appropriation, the minister of finance will handle the rest.

Ngige insisted that the venue was infiltrated by non workers orchestrated by a faction of the labour federation. He said that the conclusion was reached based on intelligence report.

He said the issue of minimum wage was being delayed because the government employed what it called a tripartite negotiation also known as social dialogue so as to capture all sectors.

He said this was because the issue did not concern the government or public sector alone but also the private sector so it needed time to carry everybody along.

“We have finished the framework for the composition of the committee of the minimum wage and we have passed it round to government to source the requisite and qualified persons that will man this committee.

Within the next quarter, the minimum wage committee will start functioning and in the next three months too backlog of all arrears and other allowances that are due to them will be paid,’’ he said.

However, NLC President Ayuba Wabba, and his Trade Union Congress (TUC) counterpart Bobboi Kagama, said that Nigerian workers had expressed anger and disappointment on the non-implementation of the minimum wage thereby disrupting the celebration.

According to them, workers have today expressed their sadness, challenges, as many of them have not earn their salaries, so it is a demonstration of anger on the situation in the country.

“The challenges workers are passing through are enormous, workers have expected that either the President or the Vice president would have being present to respond to workers yearning and anticipation.

“Workers’ attitude today have shown that it is an accumulation of anger, and that the economic situation is biting very hard on them as many of them cannot pay their bills.”

Also, some workers who spoke with NAN believed that there was no infiltration of the venue by non workers as claimed by the minister but what played out was an accumulation of grievances against the government.

Asaba Lydia a unionist of the Nigeria Civil Service Union said the workers were taken for granted by the government thus the reason for sending representatives rather than coming themselves.

Lydia said trouble began when the workers discovered that minister sent the permanent secretary in his ministry to represent him while he represents the president, adding that it was not fair to the workers.

“A day such as this, the government could not even honour workers by attending the event themselves, if the president is not available what about the Vice President?

“We have tried to follow the norm as workers and it has not worked so now we are saying we are tired of failed promises, enough is enough.”

Dassey Heblom, a civil servant, said they workers refused to listen to the speeches of the government officials because every year it had always been stories without action or implementation.

Heblom said workers were now aware of what was going on and thus would not stop asking for their rights for policy statements to be made and implemented.

“We are tired of talks, we want action, that is all we are saying, imagine we are even celebrating this day without salaries not to talk of the accumulation of unpaid allowances,” he said.