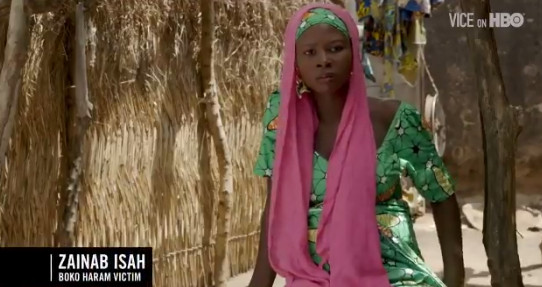 A 16-year-old Boko Haram victim, Zanaib Isah shared her story in the hands of the terrorist group, detailing how captives were treated, her fears and her hopes for the future with VICE.

Zainab said her father was killed by the Boko Haram terrorist group and only has three of her relatives alive.

She said all female captives were locked up in one room and the terrorists would pick one woman at a time to be their wife. And, they threatened to kill whoever didn’t want to get married.

She also mentioned that most of the female suicide bombers are forced into the act for their husbands’ sake.

Zainab who is also pregnant with a boy for one her abductors said she will always be restless when she goes back to her town because her son’s life is in danger.

She said her people are not comfortable with the pregnancy and have threatened to kill the baby if he is a boy, but she is however determined to keep and nurture her son.

The documentary also features an interview with President Muhammadu Buhari, where he spoke about how Boko Haram started, saying that what made “Boko Haram what it is, is injustice”. He said when the group’s leader Mohammed Yusuf mysteriously died in police custody in 2009, it became deadly in seeking for justice.