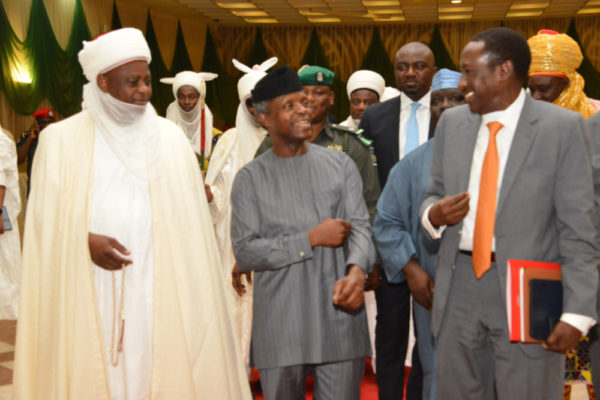 Acting President Yemi Osinbajo on Tuesday met with Northern traditional rulers and charged them to always speak up against hate speeches and divisive voices in their respective domains.

In his opening remarks at the meeting, Osinbajo said the meeting had become imperative in view of a spate of divisive statements in recent weeks, pitching the Southeast against the North.

He maintained that the divisive rhetoric and agitations were unjustifiable, unacceptable and often times illegal.

The acting president said that the traditional rulers had a great role to play in checking the divisive tendencies in the country.

We must protect each other, put our lives on the line for each other; we were brothers even in the face of death. This is the type of nation we must maintain.

As royal fathers and leaders, I think you will agree with me that we all have a role to play in countering the voices of divisiveness, and the elements who seek to take us down a bloody path.

Let us continue to counsel the misguided elements among our youth, who think that ethnic confrontation is a game and that words can be thrown around carelessly without repercussion.

Osinbajo assured the traditional rulers that the “government is not deaf to the legitimate concerns and frustrations in parts of the country.”

“Every part of Nigeria has its own grievances. But these have to be expressed graciously and managed with mutuality rather than with scorn and disdain. I would like to assure you all that we are here to listen and to answer, and, very importantly, to reassure everyone that we are committed to the unity of Nigeria, and that upon the foundation of that unity we can together build a prosperous and great country,” he said. 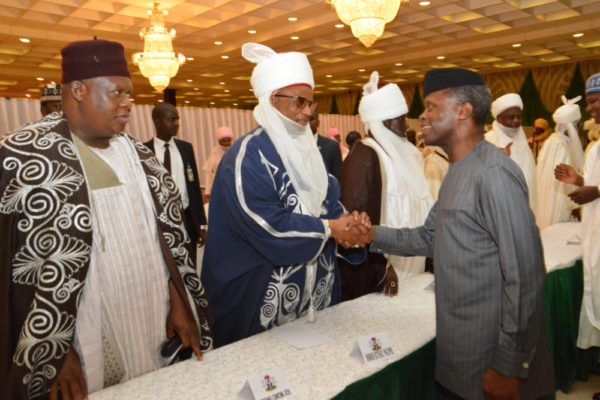 Among those who attended the meeting included the Sultan of Sokoto, Sultan Muhammadu Sa’ad Abubakar III; Emir of Kano, Muhammadu Sanusi II and the Etsu Nupe, Yahaya Abubakar.

Others were, Muhammed Isah Muhammed, the Emir of Jama’a in Kaduna State; Justice Lawal Hassan, the Emir of Gummi; the Coordinator of the Northern traditional rulers council, Sakaruyi of Karo Dr. Emmanuel Kyauta, and the representative of the Emir of Katsina, Professor Sani Lugga, the Waziri Katsina, among others.

The Chief of Staff to the President, Abba Kyari; Minister of Science and Technology, Ogbonaya Onu; Minister of Interior, Abdulrahman Danbazzau; National Security Adviser, Babagana Munguno, and Speaker of the House of Representatives, Yakubu Dogara also attended the meeting. 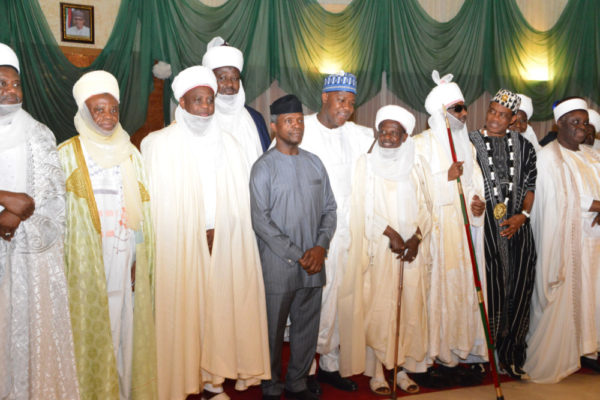 The Acting president on Sunday met with traditional rulers from the Southeast in continuation of his on-going consultative meetings with leaders of thought across the country.

Related Topics:Yemi Osinbajo
Up Next

From Refugee to Supermodel! #BeInspired by Mari Malek’s Story | WATCH