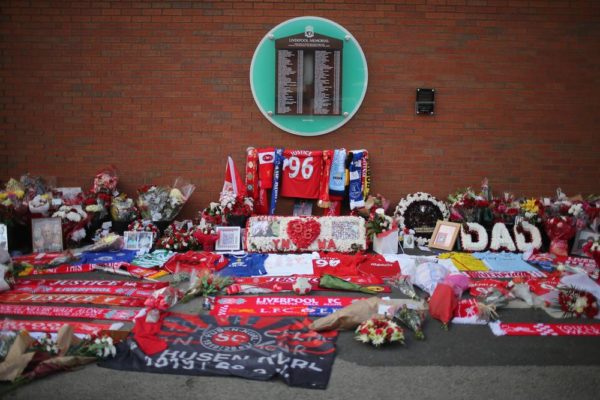 Six people including ex-police chiefs have been charged on Wednesday over the 1989 Hillsborough soccer stadium disaster in which 96 fans died.

According to Reuters, the victims of Britain’s worst sporting disaster, who were all Liverpool supporters, died in an overcrowded, fenced-in enclosure at the Hillsborough stadium in Sheffield during an FA Cup semi-final between Liverpool and Nottingham Forest.

Sue Hemming, head of the special crime and counter-terrorism division at the Crown Prosecution Service, in a statement, said he decided that there is sufficient evidence to charge the six individuals with criminal offences.

Among the accused is former police chief superintendent David Duckenfield, the person in charge of police operations at Hillsborough on the day of the disaster. He was charged with manslaughter by gross negligence of 95 men, women and children.

Norman Bettison, a former police chief constable, was charged with four offences of misconduct in public office relating to telling alleged lies about his involvement in the aftermath of the disaster and the culpability of fans.

Donald Denton and Alan Foster, who were also ex-police officers were charged with perverting the course of justice over alleged changes they made to witness statements used during the original investigation and inquest into the Hillsborough deaths.

A lawyer who acted for police, Peter Metcalf, was also charged with perverting the course of justice over similar allegations.

Graham Mackrell, who was Sheffield Wednesday Football Club’s company secretary and safety officer at the time of the disaster, was charged with contravening safety rules and failing to take reasonable care for the health and safety of others.

The defendants, except Duckenfield, will appear at Warrington Magistrates’ Court on August 9 for the first hearing in their prosecution.