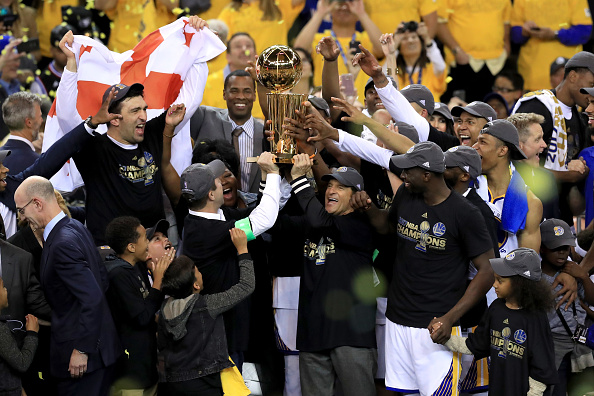 OAKLAND, CA – JUNE 12: The Golden State Warriors celebrate with the Larry O’Brien Championship Trophy after defeating the Cleveland Cavaliers 129-120 in Game 5 to win the 2017 NBA Finals at ORACLE Arena on June 12, 2017 in Oakland, California. NOTE TO USER: User expressly acknowledges and agrees that, by downloading and or using this photograph, User is consenting to the terms and conditions of the Getty Images License Agreement.

The Golden State Warriors have reclaimed their place as the NBA Champions after defeating Cleveland Cavaliers  120 – 129 at Oracle Arena.

The Warriors last year, failed to finish off the Cleveland Cavaliers in the finals, blowing a 3-1 lead in the series.

Speaking in an interview after the game, Kevin Durant said: “We prevailed. We’re champions and we did it on our own floor.”

The GSA have now won the NBA Championships two times in three years.