What Twitter NG is Saying about Saraki's CCT Victory 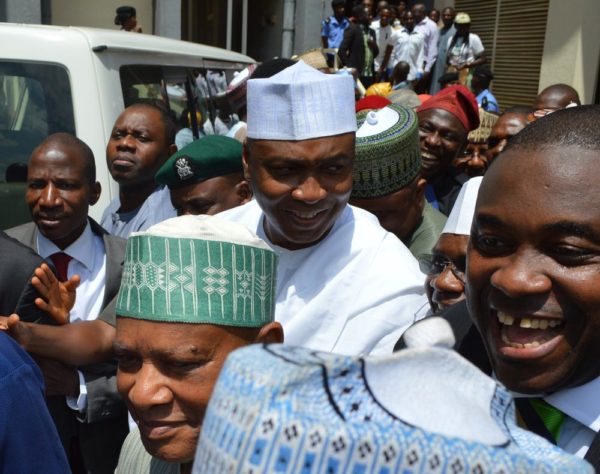 Pic.8. Senate President, Bukola Saraki and his supporters after the Code of Conduct Tribunal sitting in Abuja discharged and acquitted him of 18-count charge of non-declaration of assets, in Abuja on Wednesday (14/6/17).
03225/14/6/2017/Ernest Okorie/BJO/NAN

Saraki was discharged by the Justice Umar Danladi-led tribunal on the ground that the prosecution failed to prove its case against the accused after The Federal Government had filed an 18-count charge bordering on false assets declaration against him.

Some of the reactions from Nigerians are:

Saraki finally a free man, I saw it coming though.

A part of me hoped to see the drama of Saraki convicted. The rational part reminded me Nigeria Plc wasn’t designed to jail its shareholders.

Congratulations to Senate President Dr Bukola Saraki for the victory at the Code of Conduct Tribunal;Trial,Travail & vindication.

Saraki My leader
Saraki my hero
Saraki my mentor
Saraki my boss
Congratulates to @bukolasaraki, you fought and won them. pic.twitter.com/BT68ZNHUMZ

Huge battle lost in the fight against corruption

Since the rule of law in ?? only favours the Rich & the likes of Saraki; I won't be surprised if they say Evans didn't commit any offense.

Saraki's trial was obviously political. The prosecution of the charges were shoddy at best. And the political climate has changed.

There are 2 types of laws in Nigeria

Saraki is free but Taofik is in jail for stealing garri

Now that Saraki has been discharged (as expected) can we bury this charade of an anti-corruption war & focus on the economy?