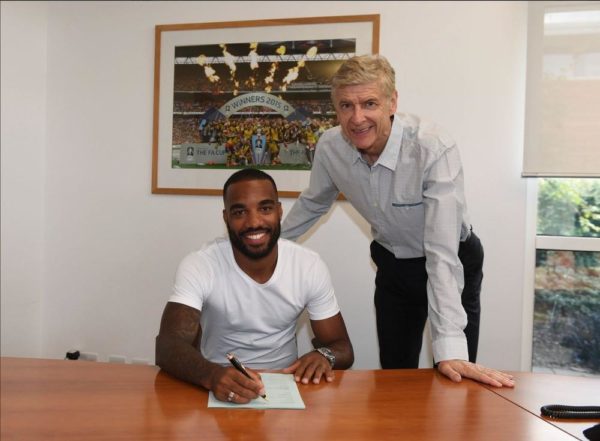 Arsenal has completed the signing of France striker Alexandre Lacazette from Lyon for a new club record £46.5m on a five-year deal according to BBC Sports.

The deal sees him surpass Mesut Ozil who was signed for a then club record £42.4m in 2013.

Lacazette said he was tempted to play for Arsenal because they play the best football in England.

The 26-year-old is expected to travel with the squad this weekend for two friendly matches in Sydney next week.

Those games will be followed by a match against Bayern Munich in Shanghai the following week.

The player added: “Throughout my childhood and thanks to Arsenal’s former striker Thierry Henry and other French players, I always dreamed of playing for this club so that dream has been fulfilled.

“I like clubs with a history and the fact that the manager has been here for a while shows that it is a stable club. There are quite a few French players at the club which will make it easy to settle in.”

Lacazette was the second-highest scorer in Ligue 1 last season with 28 goals and has netted 129 goals in 275 matches in all competitions for Lyon after breaking into the first team in the 2009-10 campaign.

Left-back Sead Kolasinac, who joined from Schalke, is Arsenal’s other recruit since the end of last season.