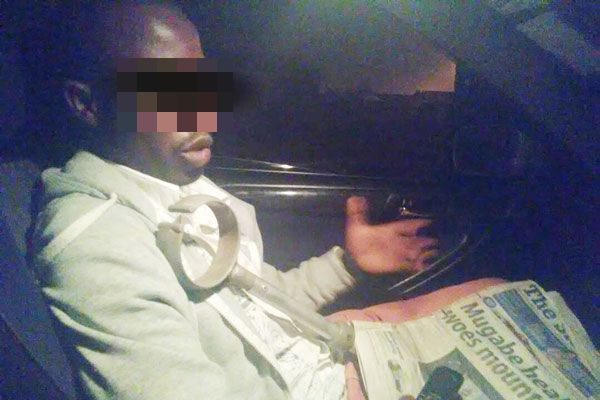 The victim | Photo Credit: The Standard

A male teacher in Zimbabwe has narrated his 2-day ordeal in the hands of female rapists.

“I used to hear it via social media platforms and there was a time in this country when the rumours of female rapists spread like veld fire and I thought they were all a joke. Little did I know that one day I would be a victim myself. I am confused, traumatised and I feel dejected,” the victim said.

“No man would ever want such an experience and as for me, I would give anything to avoid a repeat, even in a dream,” he added.

According to The Standard, the victim who teaches in Macheke, was said to have been picked up in the Makoni area of Chitungwiza. The victim said:

“My family stays here in Chitungwiza and I was on my way back to Macheke after a weekend visit when this tragedy happened. I usually prefer to use buses when travelling but as fate would have it, that day I flagged down a private car, a BMW and it stopped. The driver told me that he was going to Mutare via Marondera and that was perfect for me. There were three women already in the car, one sitting on the front passenger seat and the other two on the back seat. I got in and sat with the two women at the back and we took off.”

He added that “They were all drinking beer which was in a cooler box and when we got to Ziko shopping centre they stopped to refill. One of the ladies offered me a beer and I politely turned her down since I was not feeling well. I settled for a cascade which she handed over to me.”

He said after drinking the content of the bottle, he felt dizzy.

“I thought maybe it was the effects of the tablets that I had taken that day since I was having a running stomach,” he said. “I fell asleep and the next moment I found myself in a small room with a small bed. I screamed but no one came to my rescue.”

“My manhood felt itchy and when I looked down I realised I was bruised. I felt weak and I was confused. Then the two women who I was sharing the back seat within the car entered the room. They appeared to be much younger than the one who was seated at the front. They began removing their clothes and told me that they wanted me to have sex with them. I refused but one of them who appeared very drunk produced a pistol and told me that she would not hesitate to kill me.”

He said that the next evening, he was bundled into a car and the women drove for sometime before they dumped along Wedza-Murambinda road.

That was my first time to be in Wedza. I was assisted by some young men who directed me to Wedza centre where I reported the matter to the police. The police then took me to hospital where I was given treatment for the bruises on my manhood and also medication to prevent infection. I am grateful to the police and the staff at the hospital,” he said.

The Standard’s report said that the medical report says the victim sustained injuries on his manhood, suffered chest pains and was put on 30-day medication.

The victim’s experience is one of many carried out by “sperm bandits” – women who prey on hitchhikers and travelers, sexually assaults them and sells their semen for ‘good luck’.