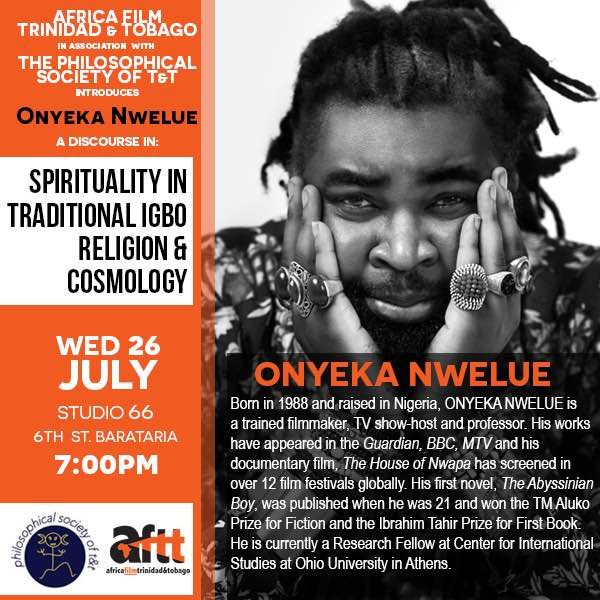 29 year-old award-winning Nigerian writer, filmmaker and professor, Onyeka Nwelue whose documentary film, The House of Nwapa was nominated in the ‘Best Documentary Award’ category at the 2017 Africa Movie Academy Awards (AMAA) is speaking today in Port of Spain, under the invitation of Africa Film Trinidad & Tobago and The Philosophical Society of Trinidad & Tobago.

In June, Nwelue released two books, The Beginning of Everything Colourful (Hattus Books) in the United States of America and The Lagos Cuban Jazz Club, after 7 years of publishing his debut novel, The Abyssinian Boy (DADA Books) which won the TM Aluko Prize for Fiction, the Ibrahim Tahir Prize for First Book and the Princ Claus Ticket Grant. Nobel Laureate Wole Soyinka has endorsed his books.

A self-proclaimed Voodooist, Nwelue will speak on “Spirituality in Traditional Igbo Religion and Cosmology.” The House of Nwapa is based on Flora Nwapa, considered as Africa’s first female novelist published in English and chronicles his experience as a worshipper of Ogbuide, the Goddess of Oguta Lagos.

It will show on the 29th of July at Little Carib Theatre in Port of Spain.

Nwelue is a Visiting Assistant Professor at Manipur University, India and currently a Research Fellow at Center for International Studies at Ohio University in Athens.

Living in Lagos & desire to gain business leadership skills? This Sprinters workshop is just for you!