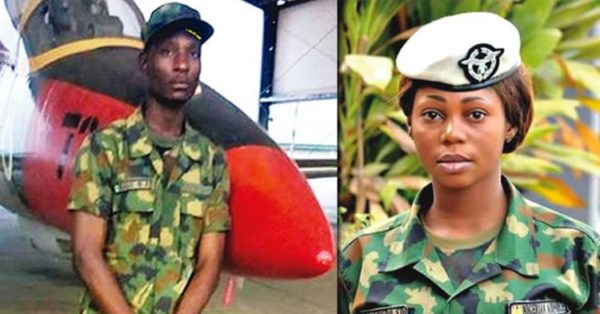 A 10-man Nigeria Air Force (NAF) General Court Martial, which tried Air Craftsman Kalu Bernard over the alleged killing of his girlfriend and colleague, Solape Oladipupo, has sentenced him to death by hanging.

Bernard, 21, had shot and killed Solape when he allegedly caught her in the arms of another man at the Air Force Base, Makurdi on March 12, 2017.

Military sources indicated that Bernard, after shooting his double-dating girlfriend, was overpowered by the lover while trying to shoot him.

Flight Lieutenant. M. A. Umoh, Judge Advocate of the court, in a 70-paged narration of the case that lasted through the early hours of Wednesday, listed the eight-count charges as murder, failure to perform military duty, housebreaking and impersonation.

Others included loss of service property, disobedience of service order and prejudice to service discipline.

“The accused has pleaded not guilty to all the charges, but the prosecution has proved its case against him beyond reasonable doubt,” he stated.

In his judgement, President of the court, Group Captain Elisha Bindul, who said that the accused was found guilty in six, out of the eight-count charges preferred against him, sentenced him to death by hanging.

He, however, said that the sentence was subject to the confirmation of the conveying authority.

The defense counsel, Abimiku Ewuga, had earlier prayed the court to temper justice with mercy in its sentence, especially as the accused was a first time offender and bread winner of his family.

Speaking with newsmen after the judgement, Ewuga commended the court for being thorough, but said that he would appeal against the sentence.

On his part, prosecution counsel, Oluremi Ilori, hailed the judgement, declaring that everybody, including the deceased, would be happy with the outcome.

Nigeria’s Social Prefect! Chiamaka Obuekwe is our #BellaNaijaWCW this Week

Believe in your Ability to Succeed