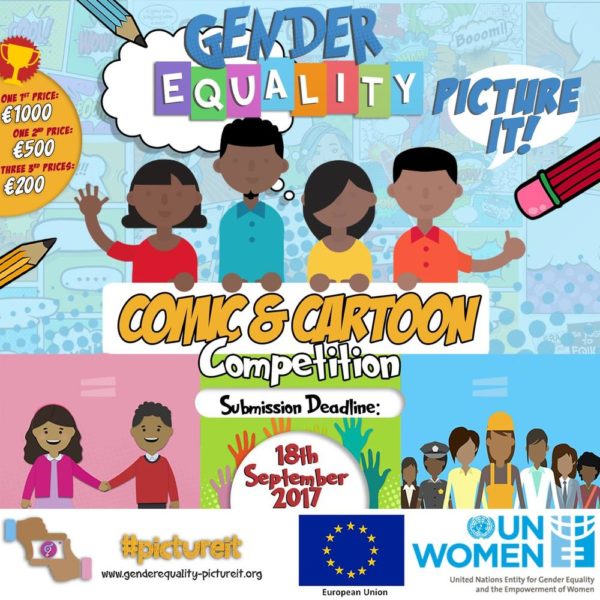 The Delegation of the European Union to Nigeria and the UN Women Nigeria Country Office have launched a comic/cartoon competition on gender equality which aims to raise the awareness of Nigerian youth on gender issues.

The earlier comic competition was part of the UN Women’s campaign Empowering Women – Empowering Humanity: Picture It! which celebrated the 20th anniversary of the Fourth World Conference on Women that took place in Beijing, China in 1995 (the Beijing Conference).

The organisers of the present competition invite Nigerian comic and cartoon artists, art students as well as other interested persons, who are between the ages of 18 and 28 and resident in Nigeria, to come forward and express their vision of gender equality.

Participants are encouraged to familiarize themselves with the contents of the Beijing Declaration and its Platform for Action. The Platform for Action includes the following twelve Critical Areas of Concern, around which the Competition centres:

They are expected to illustrate in picture form, what comes to mind when they reflect on women’s rights and gender equality, emphasizing positive changes they want to see in their country.

The participants will enter a maximum of two drawings/comic strips relating to the above areas.

Five successful entries will be selected by a jury composed of the UN Women Country Representative and the Head of the European Union Delegation to Nigeria as well as renowned professional comic artists, gender equality experts, communication experts and members of the organising entities.

Finalists will be invited to the Competition Award Ceremony in Abuja, scheduled to take place in November 2017. Travel and accommodation costs will be taken care of by the organising entities.  Prizes are set out as below:

The winning drawings will be published online and intending participants should submit a maximum of 2 comic/cartoon drawings without words on or before September 18, 2017.

For more information and how to submit entries: www.genderequality-pictureit.org