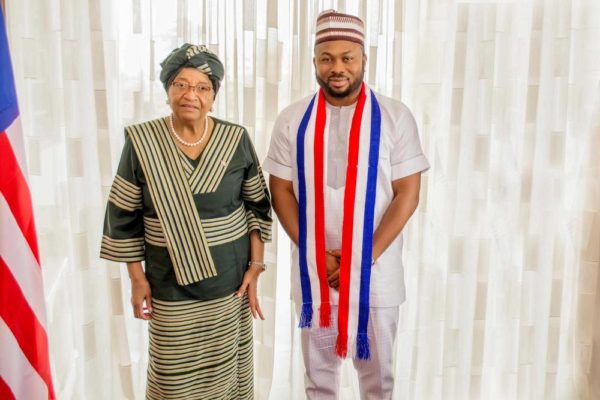 ‎The city of Monrovia, Liberia came alive with the executive reception accorded Olakunle Churchill, when he visited the Sovereign Nation of Liberia in style with his team on the invitation of  President Ellen Johnson Sirleaf. On his arrival at the airport, a cross- section of journalists and traditional dancers trooped to the airport to welcome the Nigerian businessman, philanthropist and Chairman of Big Church foundation. 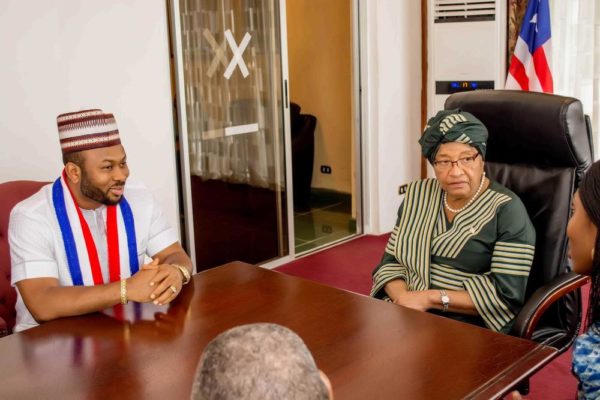 President Sirleaf who was elated in receiving Churchill to her country expressed her excitement over his ‎charity projects towards the less privileged. In her words, “we appreciate your visit and your intention to extend your agricultural empowerment project to Liberia. Nigeria over the years has displayed big brotherly love to us especially during the civil war where some Nigerian military died to save our nation”. 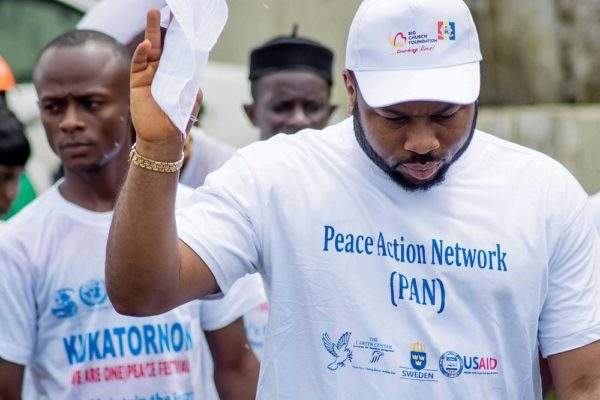 The warm reception at the Presidential villa with the ministers followed with a Peace Festival match around the city. The colourful event continued to the stadium where Olakunle Churchill was one of the key note speakers alongside the Vice president Joseph Boakai, speaking on the theme;  “Let’s Maintain The Peace, promoting Nonviolent Elections”. The event ‎had several performances including the popular Liberian blind boy Semah G Weifur also known as “Liberia’s little Flavor” who thrilled the citizens.‎

The Traditional Council of Chiefs in the country conferred Churchill with a Chieftaincy title‎ at Kamara community with the allocation of 100 hectares of land for the Agricultural empowerment project. Responding to the kind gesture, Churchill said he was humbled to be recognised and honoured in a far away African country,  while assuring them of his commitment to supporting their activities through his foundation and empowerment programmes.
‎
The 4 day Liberian Sojourn was capped up with ‎a visit to the Centre for the blind where the foundation shared medical eye glasses and other financial donations. He also took time out to put in an appearance at the Lion’s Club event as a Lifetime achievement member where he distributed more eyes glasses and other items.  ‎

‎
One of Nigeria’s foremost philanthropist and young entrepreneur Olakunle Churchill was recently hosted in Liberia after an overwhelming fire safety campaign at the Federal Fire Service In Abuja. With regards to these milestones, the Chairman of Big Churchill Foundation has opened up in this interview on all that transpired during the visit, the motive behind the fire charity donation, more insight about his foundation.

My  meeting with President Ellen Johnson Sirleaf was an honour and a very special moment in my life.  Liberia was a  pleasant experience, I was well hosted and celebrated by the people of the country. I was one of the key note speakers at the KuKatornon Peace Festival with the theme “Let’s Maintain The Peace, promoting Non-violent Elections”, because of the forthcoming general elections. I spoke along side Vice-president Joseph Boakai.We had a peace match at the Stadium in

We also had a peace match at the Stadium in the capital city of Monrovia. I had a very successful meeting with President Sirleaf and her ministers. Some of the issues we talked about were our Agricultural Empowerment project and other philantropic issues. One of the highlights of the trip was when the Council of Chiefs of the Kamara community conferred me with a Chieftaincy title in a traditional  ceremony. I was truly humbled by their benevolence and warmth. 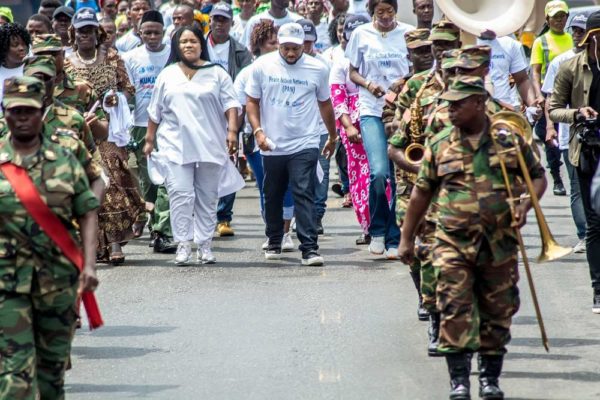 During my visit to Liberia, I was able to visit the centre for the blind where we distributed medical eye glasses and other items to them. We also went to some less privileged homes and communities to donate foodstuffs and money to support them.This is our own little way of helping to alleviate the sad memories of the country’s  civil war crisis. The Big Church Foundation is funded from the 10% of all the revenue from the parent company – Big Church Group. It is a pledge we made at the early stage of the company to socially impact our immediate communities and the continent as a whole.

It is quite unfortunate that people say what they dont know about. That information is misleading. The Big Church Foundation did not start in Malaysia, rather we conceptualised the idea of the foundation during my early days in Ghana. I do not have any ties with Malaysia or memories there. We have visited some African countries, and  Liberia Is the latest  country we visited for charity and peace movement.So you have never lived in Malaysia?

The truth is that I have never visited Malaysia let alone live there. I do not have or run any business in Malaysia. I may  visit there some time in the future but not now, it is not a priority. I have lived in Ghana, Switzerland, Nigeria and a few other European countries because I have offices there and operate my businesses within these regions.

I come from a family that is very charitable.‎ My mother is selfless and very passionate about giving. I also wish to see a world that is devoid of poverty and hunger, a world that is filled with happiness, joy and abundance. If God blesses someone, I feel it is important he or she extends his hand of love to the needy. Empowering people is very important to me. The desire to assist the poor or less priviledged is an integral part of me. I live by the mantra; “Giving Is Living”.

Well, funny enough 60% of my humanitarian activities  are not publicized or in the media. My several charity activities in Ghana and other African countries are usually behind the camera. Some of our activities you see or read in the media are a selected few to encourage others to support the cause, and also start to give back in their own way. We are not in it for fame or glory, but to inspire others in the private sectors to be socially responsible. It is also important to note also that our charity projects and activities tend to attract media attention and we are grateful for their continued support.

Ready for a Pan African Road Trip this September? Join #Kilometer51 to explore the Development Initiatives across Africa