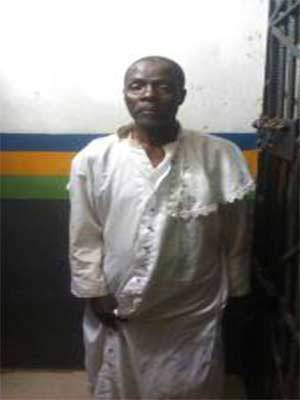 The Police in Ogun on Wednesday arrested a 77-year-old pastor, Samuel Babatunde and two other suspects in connection with the discovery of human parts buried inside a church.

Babatunde is the founder of Cherubim and Seraphim Church, Itedo Isinmi Ayo Parish, Egan Road in Iyana-Iyesi area of Ota in Ado-Odo Ota LGA of Ogun.

The state Police Commissioner, Ahmed Iliyasu, who paraded the pastor in Ota, told reporters that the discovery followed the arrest on Saturday of a suspected serial kidnapper, Jeremiah Adeola.

He said that Adeola, 32, who specialised in kidnapping children, confessed that the pastor of the white garment church was the receiver of the abducted children.

The CP added that a 43-year-old herbalist, Haruna Afolabi, was among the suspects, who allegedly buried the human parts at the entrance of the church. 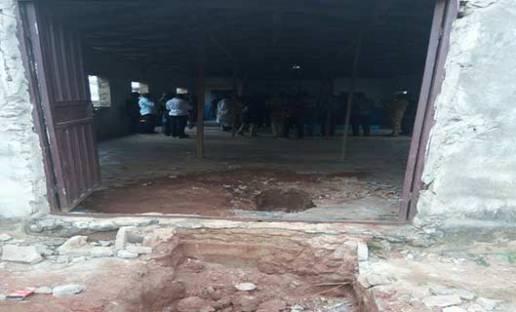 The entrance of the church | Photo Credit: The Nigeria Lawyer

According to the police boss, operatives attached to the police Area Command in Ota on Sunday received intelligence about Adeola and arrested him.

Iliyasu said: “On the strength of the intelligence, detectives from Ota Area Command were detailed to effect the arrest of the suspect.

“At about 10.20 a.m. of the date, their efforts paid off when the said Jeremiah Adeola was arrested.

“On interrogation, Adeola confessed being a serial kidnapper and mentioned a prophet of a white garment church as the receiver of the kidnapped children.

“Upon interrogation, Adeola was taken to the house/church the said prophet at Iyana-Iyesi Ota, where one Prophet Samuel Babatunde, 77, the pastor in charge of the church and one Haruna Afolabi, 42, a traditional worshiper, were arrested.

“The floor of the church was dug as described by the first suspect and parts suspected strongly to be human parts were dug out,” Iliyasu said.

The commissioner said the police command would conduct forensic investigation into the case.

He assured that all those found guilty of the crime would be brought to justice, adding that Ogun State would never be a safe haven for criminals.

Speaking in an interview with newsmen, the pastor denied the allegation levelled against him.

Babatunde explained that a pig was buried alive inside the church contrary to claims that human parts were buried there.

He said that he carried out the act in order to bring good fortune, prosperity and comfort to his congregation.

Babatunde said though he met Adeola at a prayer mountain in Ibadan, he never had any dealing with the alleged serial kidnapper, whom he accused of being mentally unstable.

However, Adeola insisted that the pastor was the receiver of some kidnapped children.

He said the cleric paid him N50,000 each for the two children he supplied to him.

Senate pleads with ASUU to call off Strike