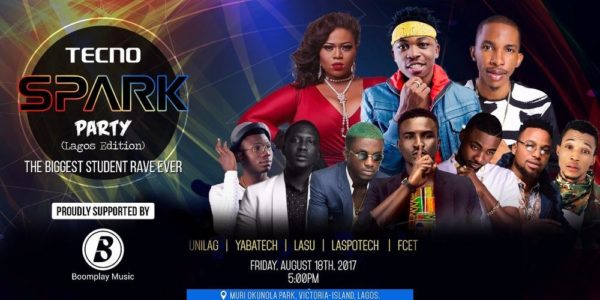 Lagos, are you ready? UNILAG, YABATECH, LASU, LASPOTECH and FCET are about to have an experience of a life time as TECNO is about to spark up Lagos with the principal of all campus parties- TECNO SPARK PARTY!

For a brand that has taken over the smartphone space in Africa, expect nothing but the best of entertainment from the TECNO Spark Party. It’s the most anticipated campus raves of 2017 as the mobile giant is set to invade Nigerian Universities to give them the time of their lives with the maiden event to kick off in Lagos.

Don’t be told, be there to witness history, as “Mama” crooner MAYORKUN will be there to dish out hit singles from his yet to be released album. Also to mesmerize the audience with her soulful voice is 1st runner-up on MTN Project Fame West Africa Season 6, Immaculate.

A host of other artistes lined up to perform include Olaboi, Gbasky, Minz, Pryce Williams, Jabby Jay, Willcino and Sydney, with DJ Consequence live to dish out the best party mix on-the-go. Trust us, you wouldn’t want to miss this! If you don’t have a hold of your ticket, don’t panic yet as you still have a chance to. Simply head to Tecno’s Facebook, Instagram or Twitter and you might just win your right on time for the party!

This also celebrates TECNO Mobile’s idea of a holistic mobile camera phone, captured on the TECNO Spark. Pre-installed with high definition camera features that automatically brighten images, every component of the TECNO Spark is put together to complement its camera, with a price tag that sure attracts the young folks.