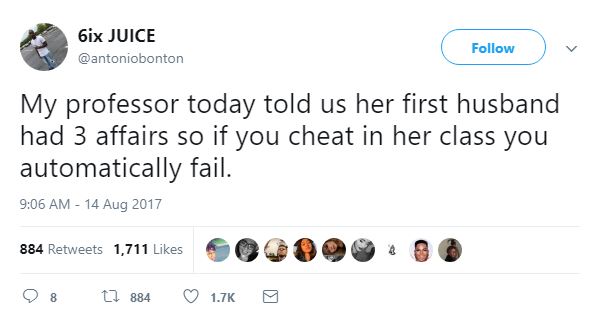 Twitter user (@antoniobonton) in a series of tweets revealed a hilarious but thought-provoking episode with his college professor.

He explained that the said professor hates students who cheats during exams and tests and the reason is because her first husband once cheated on her with 3 side-affairs.

She went ahead to state that whenever a student cheat, she gets flashbacks of the episode and also went ahead to name the girls involved.

My professor today told us her first husband had 3 affairs so if you cheat in her class you automatically fail.

Probably shouldn’t have been as funny as it was.

She was like “the anger never leaves, any time a student cheats on an assignment I remember how much I hate cheaters”

Last thing.. She even as far as to tell the class the names of the girls ??

While some commenters are laughing away at the thread, others say her resolve is a symptom of damaged emotions and she needs to see a psychologist.

However, cheating in examination leads to varying kinds of punishment from the institution involved including retaking of the examination, suspension or expulsion.

BN Fam, what are your thoughts on this?

Suhaib Mohammed: 3 Reasons Why You Should Take Care of Your Health