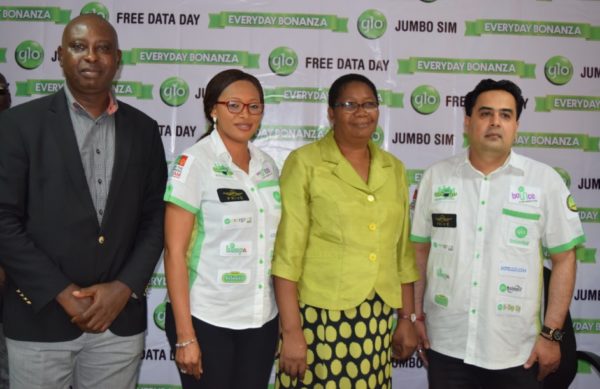 For existing and new subscribers on the network of telecom operator, Globacom, the Yuletide season appears to have started on an exciting note as the company on Monday rolled out two major offers, Everyday Bonanza and Glo Jumbo SIM to delight them.

The new offers are bound to raise the bar in customer appreciation in the country, with thousands of its subscribers winning unbelievable prizes worth hundreds of millions in Naira in the Everyday Bonanza.  The prizes include Flat Screen LED TV sets, 4G-LTE phones, generators, refrigerators, Microwave ovens and 4G-LTE MiFis which will be won every day from Monday to Saturday throughout the duration of the offer. The icing on the cake is a brand new car which will be won  every Sunday while the offer lasts.

The second offer, the new Glo Jumbo SIM, comes with an amazing N200,000 worth of free airtime. This is indeed a landmark offer as it marks the first time any operator will pre-load SIM cards with such a whopping amount of airtime value, which can be used for calls, SMS and data.

The two offers were formally introduced at a media launch held at Mike Adenuga Towers (MAT), Victoria Island, Lagos, head office of the company on Monday. The event was attended by Glo brand ambassadors, representatives of the Nigerian Communications Commission, the Nigerian Lottery Regulation Commission (NLRC) and the media.

On how the Everyday Bonanza works, Israni added that all a subscriber needs to do to qualify for these life-impacting prizes is to recharge his or her phone with at least N100 worth of credit. Each N100 credit purchased entitles a subscriber to an entry. In essence, a subscriber who recharges his or her phone with N1000 credit automatically gets 10 entries. Post-paid customers are not left out. Every N100  usage on their line qualifies as an entry to the daily draw. Furthermore, purchase of  eTop-up, SIMs and data products from any Glo World outlet will give the subscriber additional entries into the daily draws.

“So the more recharge a subscriber makes, the more entries he gets and consequently the greater the chance to win quality gifts everyday!” said Israni.

Speaking on the second offer, Israni said this is a special Jumbo SIM which gives the Glo subscriber value that is not only unprecedented but also unimaginable in Nigeria’s telecoms industry. According to him, anybody who buys the new Jumbo SIM for N100 will automatically have an airtime value of N200,000 preloaded on the SIM. This airtime will however be unlocked as the subscriber recharges his or her phone until it is fully depleted.

Existing customers who want to enjoy this bounty can opt in by dialing *224#.

“With these two offers, I can proudly say that Nigerians should look no further than Glo as their preferred telecom service provider,” said Israni, adding, that whilst other operators are squeezing costs, Glo has elected to remain faithful to its esteemed customers and Nigerians as a whole by rewarding and empowering them.

He called on telecom subscribers to continue to support Globacom as the wholly owned Nigerian company remains irrevocably committed to meeting and exceeding their expectations.

In addition to the offers, the company also used the opportunity of the unveiling to announce the 3rd installment of its proprietary Glo Free Data Day, which comes up on Tuesday, October 31st, 2017. This offer is open to all subscribers who use up to 100MB plus N150 on voice calls or N250 on voice calls in the seven days preceding the Free Data Day. He explained the third Free Data Day followed overwhelming response to the offer in the two past editions.

Join Nike Adeyemi & Nkoyo Rapu at This Present House Women Breakfast Meeting as they speak on Seasons of Life I Saturday, October 28th