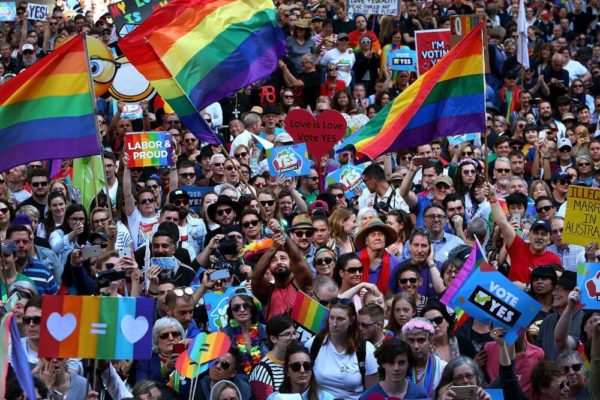 Streets across Australia were filled with celebration as the nation voted an overwhelming yes to same sex marriage.

According to CNN, in what has been a 2-month national postal survey, 61% voted in favour of same sex marriage, while 38% voted against.

Rainbow flags, smokes and confetti were eveywhere as crowds awaited the result.

Australia Prime Minister Malcolm Turnbull, who was for the move, told reporters that its now up to the parliament to get on with the bill. He said:

Opposition leader Bill Shorten, who said the postal vote should never even have happened, celebrated with the crowd. He said:

I feel for young people who had their relationships questioned in a way I wouldn’t have thought we would see ever again, but nevertheless what this marriage equality survey shows is that unconditional love always has the last word.

The specifics of the Same Sex Marriage Bill are expected to be debated as early as this week, with the bill expected to pass before Christmas.

We are the Future of Africa! Special Invitation to The Lisa Demi Project themed Let’s Talk about our Sexual Health I Thursday, Dec. 14th