Coronavirus: First Vaccine Issued in US & Other World Updates You Should Know 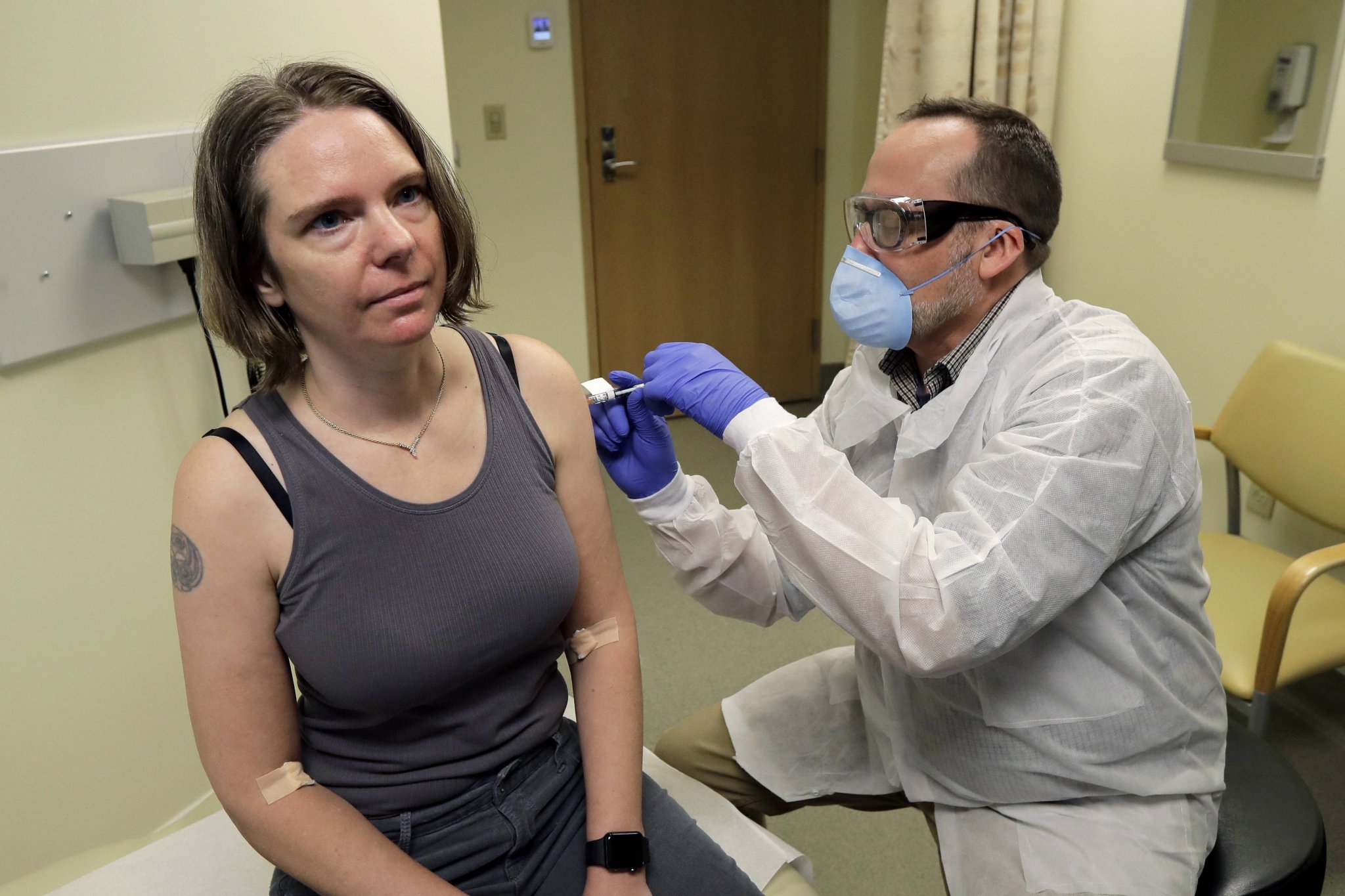 Due to the rise in the number of causalities, countries have taken the pandemic seriously, closing schools and public places. In Europe, millions are under lockdown and also in some Asian countries, schools and non-essential businesses have been closed, and travel restrictions have been placed.

Pastor Adeboye has a word of hope and faith for everyone

Amid all the turmoil, the General Overseer of the Redeemed Christian Church of God, Pastor E.A Adeboye, in a video gave everyone a reason to be calm and hopeful.

He said, “I want to assure you that so far you are in the secret place of the Most High, no virus can come near your dwelling. Remember being able to abide under his shadow involves you living a life of cleanliness. The basic things like washing your hands, keeping your environment clean and adhering to basic hygienic measures are next to Godliness. God bless you”.

I want to assure you that so far you are in the secret place of the Most High, no virus can come near your dwelling. Remember being able to abide under his shadow involves you living a life of cleanliness. The basic things like washing your hands, keeping your environment clean and adhering to basic hygienic measures are next to Godliness. God bless you.

A post shared by PastorEAAdeboye (@pastoreaadeboyeofficial) on Mar 16, 2020 at 3:53am PDT

The third Case in Lagos, Nigeria

Jubril Gawat, the Special Assistant to the State Governor Babajide Sanwo-Olu on New Media, shared on Twitter that a third case of the coronavirus has been confirmed in Lagos. The patient is a 30-year-old Nigerian woman who returned from the UK on March 13, went into isolation, developed symptoms, and has tested positive.

France on Lockdown & anyone who breaks the rules will be punished

To curb the spread of the pandemic, some parts of China, Italy, Spain, and the Philippines, have put their citizens under partial or total lockdown. So far, the pandemic has killed over 148 people and infected more than 6,600 in France.

In a televised address, the President of France, Emmanuel Macron announced Europe’s borders will close at lunchtime on Tuesday for 30 days. He has issued a strict restriction on people’s movement to slow the spread of the virus and said the army will be drafted in to help move the sick to hospitals.

Restaurants and bars, schools, ski resorts are off-limits, all vehicle and pedestrian movements to be justified. Anyone who breaks the rules will be punished. “I’m appealing to your sense of responsibility and solidarity,” Macron says. Macron also shared that French businesses will be supported: guaranteeing bank loans up to $300bn; companies rent and utility bills suspended. “No company, of any size, will be allowed to go bankrupt.”

Paris is one of the most densely populated cities on earth. People live in tiny apartments; the city’s social life is conducted in bars, cafés, restaurants, parks. These public spaces are our escape valves. This is going to be extremely difficult. Yet ‘we are at war’, Macron says

All French companies that can organise for staff to work from home are ordered to do so. Only strictly necessary trips outside, eg shopping, will be permitted — along with trips to work when working from home is not possible

All French government reforms have been placed on hold, Macron says. Not an easy thing for a president who came to power promising wholesale change of French politics, but needs must. The second round of the municipal elections will be delayed

As in Italy, you will be allowed out to do ‘a bit of exercise’ under the new French restrictions, providing you stay away from other people. Which is very important for not going crazy.

Macron’s announcements tonight may come across as rather severe, but actually the delivery was rather gentle. And most importantly, reassuring.

Breaches of the French lockdown will be punishable with fines of €38 which could go up to €135. Light, actually, compared to Italy, where the punishment can go up to a €206 and a 3-month jail sentence, or even a €600,000 (!) fine for serious lockdown breaches in Spain

The situation in the US

Cases in the United States of America has surpassed 4,400 and at least 87 people have died, Donald Trump led a “nationwide response, bringing together government resources and private-sector ingenuity, every American can help slow the virus’ spread and keep our most high-risk populations safe”, according to the White House website. 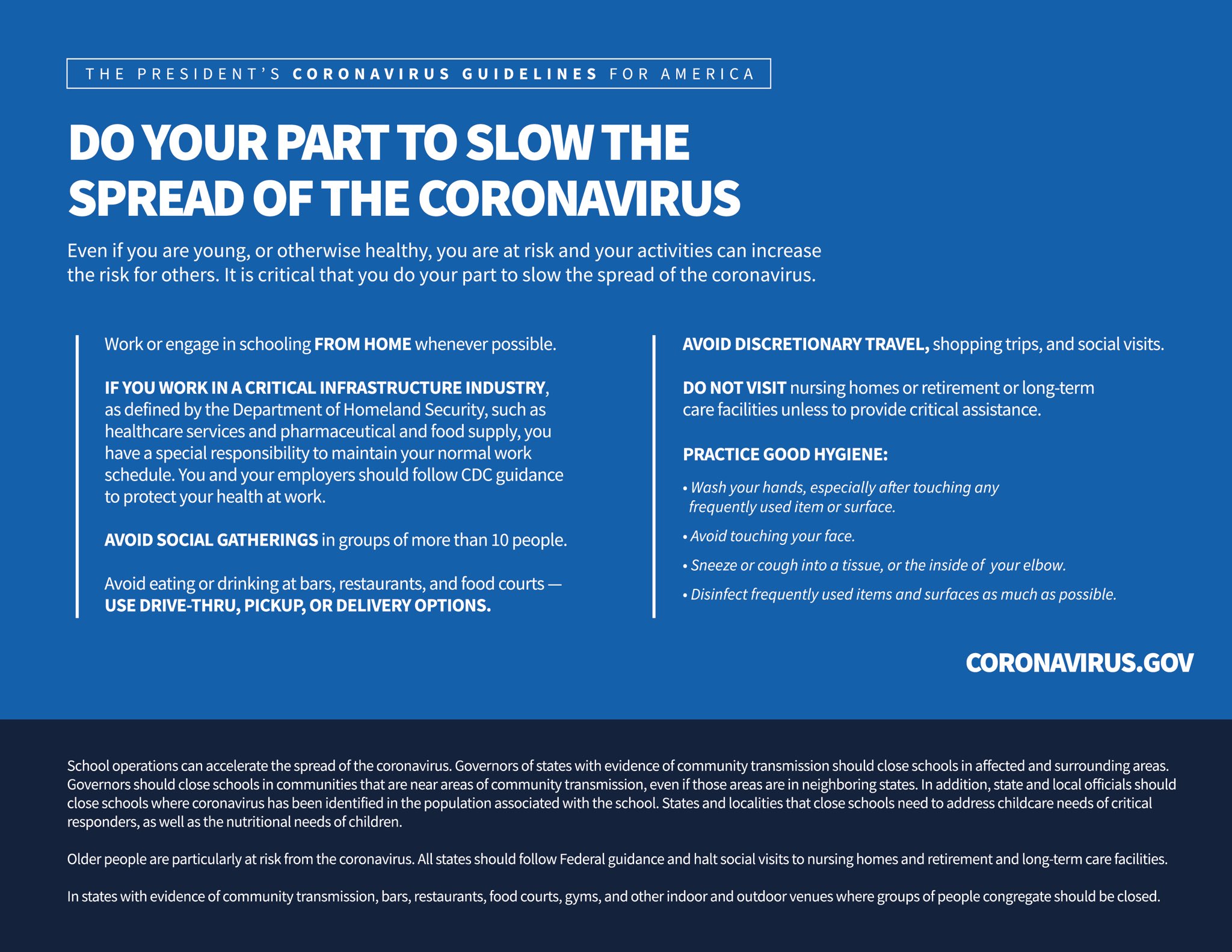 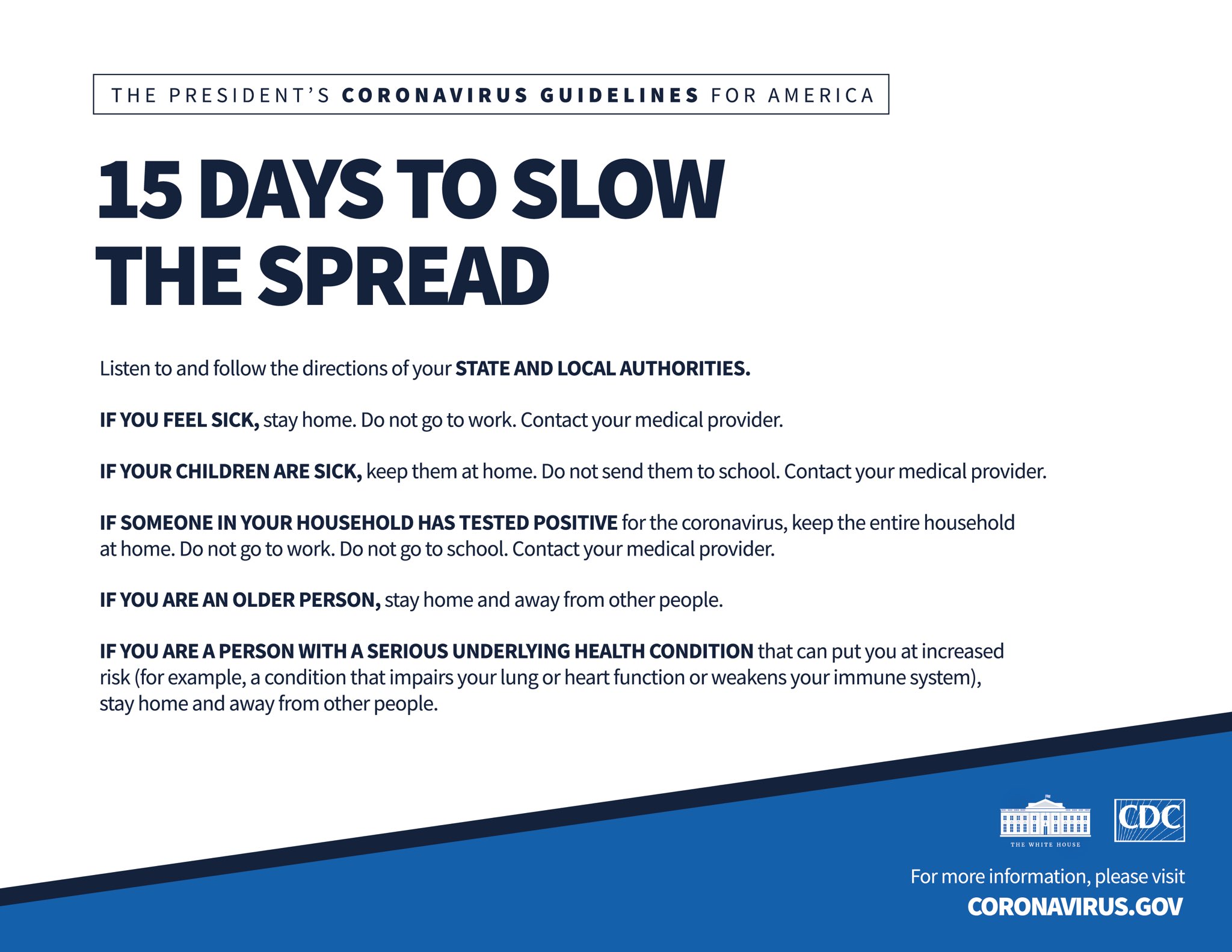 The White House guideline is urging everyone in America to avoid gatherings of more than 10 people. The new guidelines state:

? Work and do school at home.

? Do not visit long-term care facilities unless to provide critical assistance. pic.twitter.com/60iTBikZhE

On Monday, the National Institute of Allergy and Infectious Diseases shared that coronavirus vaccine trial in the US has now given a dose to its first participant. Jennifer Haller, a healthy mother of two, became the first person to test a potential vaccine for COVID-19.

Although the vaccine is effective in preventing Covid-19 infection, however, it will require follow-up studies involving many more participants, which will take many more months, CNN reports.

Several countries in Europe and Asia have placed travel restrictions regardless of the port of origin. Some destinations have travel restrictions, quarantine measures, border closures and health screenings in place due to the outbreak. Meanwhile, countries like, South Korea, Japan, Malaysia, Philippines, Thailand, India and among others have all placed a travel ban/restriction in and out of the country.

One of the fashion events, the Met Gala which has been held since 2005 without fail, scheduled for May 4, 2020, has now been postponed until further notice. The news follows a wave of cancelled and postponed cultural events around the world due to coronavirus.
Writing on Vogue.com on Monday, Anna Wintour confirmed that the fundraiser would not be held as planned. She wrote, “Due to the unavoidable and responsible decision by the Metropolitan Museum to close its doors, About Time, and the opening night gala will be postponed to a later date”.

On Moday, March 16, I chaired a meeting of the National Security Council during which additional measures were taken to combat the spread of the #Coronavirus (COVID -19) in our country. Suspension for a period of 15 days, renewable, starting at midnight on March 16, 2020, from the entry into Côte d’Ivoire of non-Ivorian travellers from countries with more than 100 confirmed cases of illness from coronavirus.

Quarantine of suspected cases and contacts of patients in centres requisitioned by the State. Health control will be reinforced at the air, sea and land borders. All preschool, elementary, secondary and higher education institutions will be closed for a period of 30 days from March 16, 2020, at midnight.

Respect of a distance of at least one (01) meter between people in supermarkets, scrub, restaurants, businesses, the airport area and public places. Respect for personal, behavioural, water and food hygiene measures – Prohibition of manual greetings, hugs and hugs and the consumption of bushmeat.

Diagnosis and management of all suspected and confirmed cases of COVID19 will be free.

On Tuesday, March 17, Malaysia announced its first coronavirus death in a statement from the government’s Disaster Management Committee Tuesday. The victim is a 60-year-old pastor from Emmanuel Baptist Church Kuching in Sarawak. 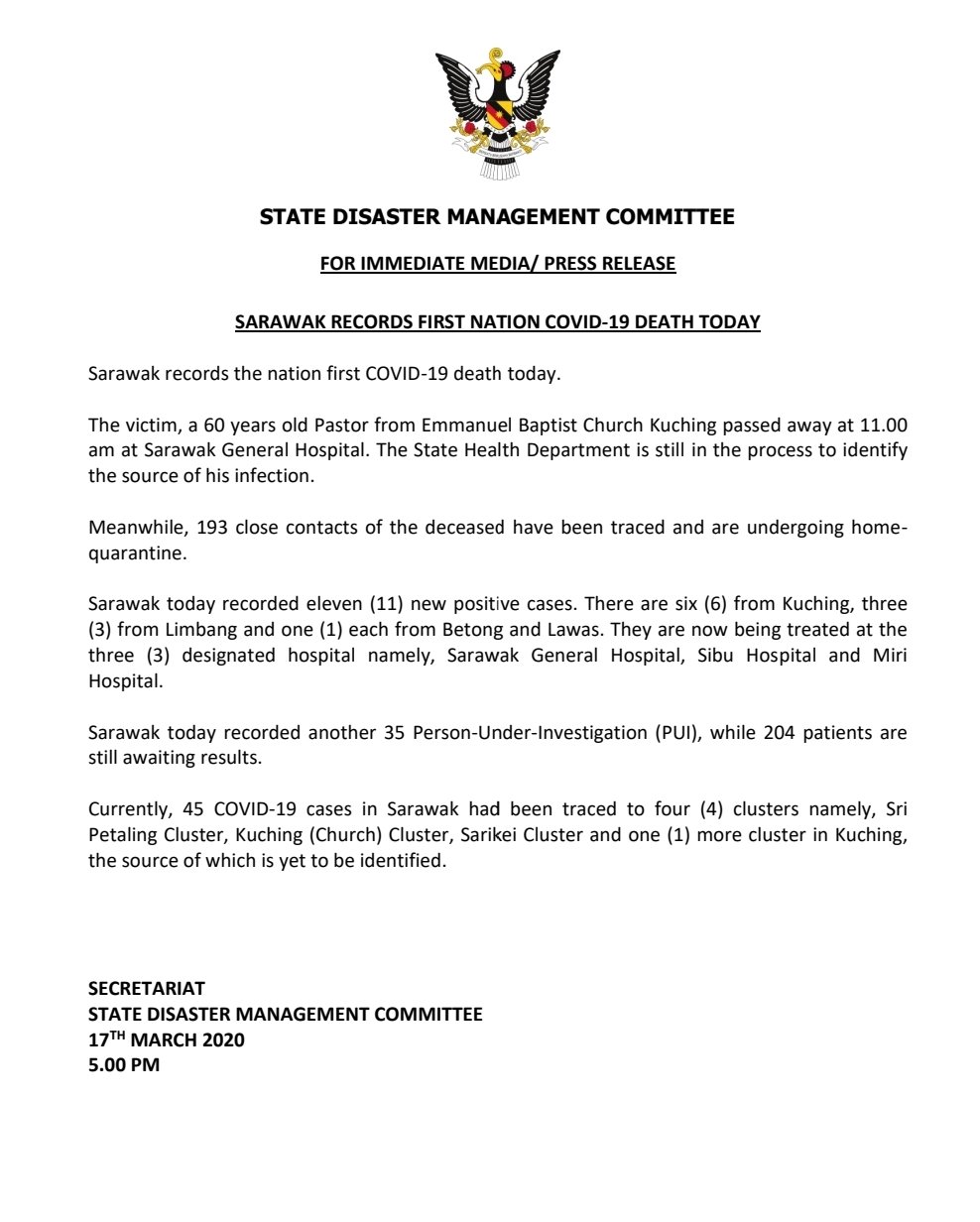 Over 1,350 prisoners escaped from four semi-open prisons in São Paulo state in the south-east of Brazil after Easter prison holidays were cancelled and restrictions on visitors tightened because of coronavirus, according to the Guardian. This video below shows dozens of prisoners fleeing down a street near one coastal prison.

The Spanish minister of health, Salvador Illain on Monday announced that the Spanish government will be taking over all private hospitals and healthcare providers in the country in its latest move to combat the spread of the coronavirus.

According to Business Insider, private healthcare facilities would be requisitioned for coronavirus patients, and manufacturers and suppliers of healthcare equipment must notify the government within 48 hours.

There’s a Third Confirmed Case of the Coronavirus in Lagos