Banker allegedly tortures Wife to Death in front of Son 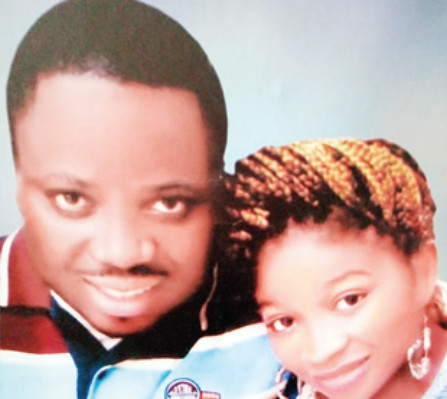 Olaoluwa Adejo, a bank staff, has reportedly been arrested by the Lagos State Police over the death of his wife, Maureen, Punch reports.

Adejo had allegedly hacked Maureen with a machete, before forcing her to ingest otapiapia (insecticide) in their home in Oworonshoki, their 5-year old son said. He told Punch:

My daddy said my mummy should get out of the house. My mummy said no. In the night, my daddy woke my mummy up and said, ‘Mosquito is too much, let me go and buy otapiapia’. My daddy forced my mummy to drink it. She shook her head. She vomited.

My daddy slapped my mummy. My mummy did not do anything to him. My daddy gave her one blow. My daddy kicked her. My daddy told her to get out of the house and carry her load. Small blood came out. My daddy slapped her, kicked her, machete her, blow her, and put otapiapia in her mouth and in the food.

Maureen’s mother, Kate Jonathan, revealed to Punch that her daughter had moved out of her matrimonial home and into hers, and had decided to move back in to attend her children’s school party. She said:

I was called on the telephone by an unknown number around 4pm on Sunday, November 12. The caller said, ‘Your daughter’s husband has killed her at Oworo’. He dropped the call.

I didn’t see my daughter or her husband. I was begging them to open the door when I saw (Maureen’s son) jumping up through the window. He saw me and asked the boys to open the door, but they refused.

I broke the louvers of the window. The boy climbed a stool and said from inside, ‘my father has killed my mother and taken her away.

She added that the after reporting the case at the Oworonshoki Police Station, she was told the husband had already reported that his wife had committed suicide by drinking the insecticide Sniper.

Maureen’s body, already deposited at Gbagada General Hospital mortuary by Adejo, was ordered to be removed by the police to the morgue of the Lagos State University Teaching Hospital.

Adejo was reinvited by the police and then arrested, based on the account Jonathan gave. He was transferred to the State Criminal Investigation and Intelligence Department, Yaba, and their son was invited on the insistence of Jonathan, to give an account of what took place in their home the night his mother died.

Jonathan told Punch that Maureen’s body, which she saw at the mortuary, had deep cuts on the arms and legs. She said:

My daughter, who worked as the manager of my chemical company had, about a week to the incident, complained that her husband said we would soon see her obituary.

I sent my eldest daughter to accompany her to the house to know what happened. The man begged and said he was only joking. He said he really loved his wife. I insisted that she pack out of the house.

She was in my house for three days before she said she wanted to return home because her children’s school would be having a cultural party. She left and went to the party with her husband on Saturday. It was that night that she was brutalised and killed by the husband. From what we saw in the mortuary, she had blood in her nostrils and deep cuts in her hands and legs.

Adejo’s mother, Florence Adejo, said she believed her daughter-in-law committed suicide, as reported by her son. She said:

He came to knock on the door of my house late that night. He fell on the ground and started weeping and lamenting that his wife had destroyed him. A crowd gathered in front of the house where I am the landlady. They tried to console him. He said his wife took Sniper. He said he thought it was a joke until their son, Richard, went to bring the container of the insecticide.

The Police Public Relations Officer, SP Chike Oti, said that the police isn’t accepting the case of suicide “hook, line and sinker,” and is furthering investigations. He said:

The man came to report that his wife committed suicide. The DPO put some questions to him. We thought we should investigate further to know what really happened because there are some doubts we need to clear in the matter. The police is not accepting the claim of suicide hook, line, and sinker. The matter is at the SCIID and investigations are ongoing.

Achieve your dream to Study Law in a UK University- Meet with Representatives from MOD on Nov. 28th- Dec. 1st