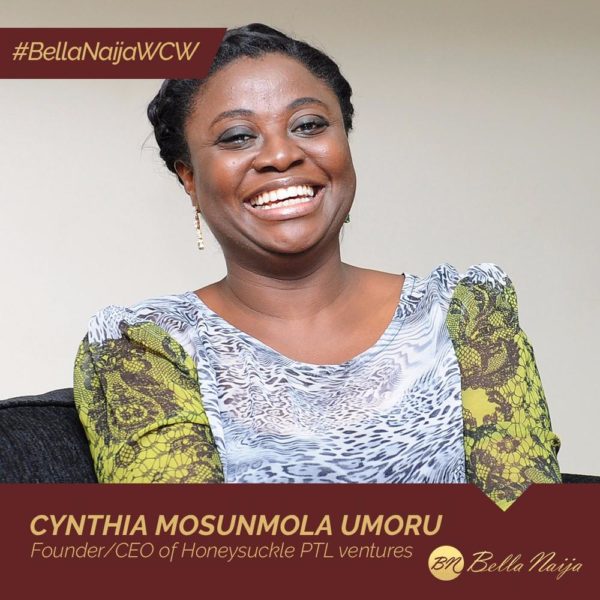 #BellaNaijaWCW this week Cynthia Mosunmola Umoru had always showed signs of entrepreneurial quality at a young age; she was making and selling hair clips and ribbons at a local secondary school. She was also the president of the Young Farmers’ Club in her secondary school, a position she attained while following her recreational interest.

Cynthia’s childhood passion was that she becomes a medical doctor, but providence had other plans. While she passed the entrance examination for admission into her choice medical school, she was forced to attend another university due to violence in the northern part of Nigeria at the time. She studied Zoology/Animal Biology at Lagos State University and it was while there, she embarked on her entrepreneurial journey.

Cynthia did not just study Zoology, she took courses in fisheries, was into mini-livestock farming and multi-level marketing, and also ran a cake and cookie business.

In her final year, she launched the business she’s now known for – Honeysuckles PTL Ventures – where she sells processed food produce. Soon after launching, she got one of the fastest growing food retail chains in Nigeria into her clientele to supply dressed chicken and catfish. Scarcity of produce and low quality soon became a challenge, and this made Cynthia launch her farm to solve the problem.

Cynthia is also the Founder/CEO of Farmshoppe, a retail industry launched in 2011. Farmshoppe was borne from one of her businesses in the university. While in the university, she was  shopping for women, who were busy executives and could not find the time to go to the market. She founded Farmshoppe to provide a platform where such women could come to pick their fresh food produce at competitive prices.

Cynthia is not just bettering her life and those of her clients with her skill and knowledge, she’s also giving back to the society, especially to the younger generation. She had lost money and time while she was starting up, chiefly because of lack of mentoring and she doesn’t want this to happen to the younger generation. One of her farms is used for training of young individuals interested in agriculture. She also engages schools, governments and businesses to recognise the effect of the absence of infrastructure is having on youth participation  in modern agriculture.

Realising the usefulness of mini-livestock farming in piquing young peoples’ interest in agriculture, she went on to write a short book breaking down this revelation.

Cynthia is an alumnus of the Pan African University under the Enterprise Development Center (CEM) and Alum of the U.S Department of States International Visitors Leadership Programme.

Cynthia has served as a Youth Consultant to the African Union Commission.

In 2009, she won the Business Owner of the Year award at The Future Awards Africa (TFAA). In 2011, she was elected to the Ashoka Fellowship.

Since 2016, Cynthia has been serving as a Technical Adviser (Youth & Gender) in the Federal Ministry of Agriculture and Rural Development, advising on an inclusive approach for youth and women engagement in agricultural economic activities In Nigeria.