Filmmaker, Journalist & Poet ??! Wana Udobang is our #BellaNaijaWCW this Week 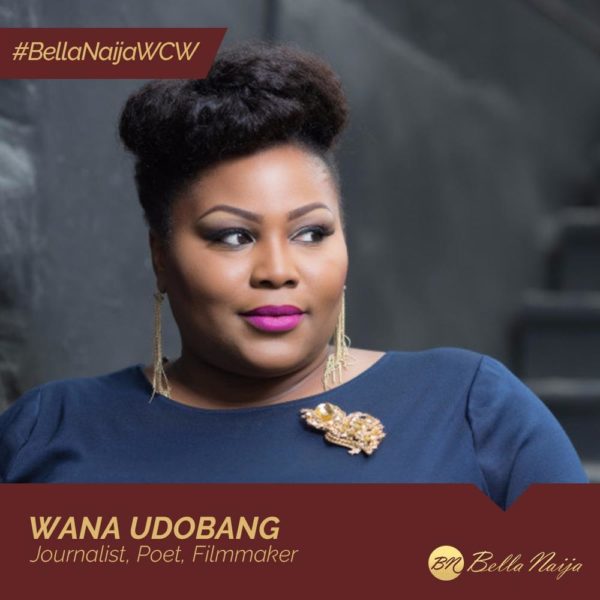 It was the legendary Nigerian novelist and poet Professor Chinua Achebe who made the profound statement: ‘Until the lions have their own historians, the history of the hunt will always glorify the hunter,’ which resonated in the hearts of everyone, particularly those of African origin.

We, as Nigerians and Africans have to put our stories out there, let the world know what we are, what we stand for, our culture, histories. But for so long, we had a small number of “historians” who told our stories, and what they published never really went far.

Today, with the popularity of social media, and how smaller the whole world has become, making anything – a story, a video clip, a photo – go viral and reach the billions of people on earth has become easier. It just has to be compelling enough, and shareable.

We have the new age storytellers who are pushing the African narrative to the world: the stories that were hitherto untold (to the world). One of these storytellers is our #BellaNaijaWCW this week – Wana Udobang.

Wana is a journalist, poet and filmmaker, who describes herself as one “who works at the intersection of women’s rights, social justice, personal narratives, culture and the arts.”

After graduating from the University for The Creative Arts, Surrey, England with a first class degree in Journalism, Wana worked with the BBC Radio4,  BBC World Service, and as a researcher in various production companies. She moved back to Nigeria and worked with Inspiration 92.3 FM for six years before resigning.

Wana, since leaving her last radio job, has been involved in several arts-related projects and has constantly championed women’s rights and social justice on her platforms.

Wana is a recipient of the International Reporting Project (IRP) Fellowship, the Gabriel Garcia Marquez Fellowship in Cultural Journalism, and the Religion News Foundation grant. She was also long listed for the One World Media award in the Women’s Rights in Africa category.

Wana has released two poetry albums to date: the first titled Dirty Laundry and the second In memory of forgetting which she says “explores brokenness and self-renewal.”

Wana is the producer of Sensitive Skin a documentary film on Psoriasis; Nylon, a short documentary on grief, and the docu-series Warriors, exploring the lives of people with sickle cell disease. She is also the creator of the interview series Culture Diaries.

Wana wrote and directed the web series Room 313, an experimental series which is all about speaking about trauma, or the things you are trying to cope with; and the short film Shrink, which tells the story of a young woman who is struggling with the battle between her person and society’s perception of her body.

Together with Bukola Oye of The Sole Adventurer, Wana created Art Forum Africa (AFA), “a discourse initiative that seeks to address matters that concern artists, curators, collectors, governments, art and culture managers, and others that are involved in art in Africa.”