#BBNaija - Day 29: Contradictory Housemates, All Or Nothing & More Exciting Highlights 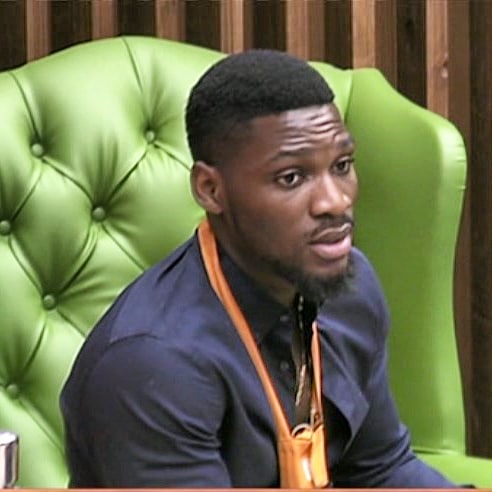 Did you watch day 28 of the Big Brother Naija 3 reality show?

As the month of love draws to an end, Ahneeka’s charm seems to be going strong. Both Rico Swavey and Angel are very fond of Ahneeka but in different ways, as they explain.

Angel has said previously that he really likes Ahneeka, but not romantically. He likes having her around because he feels relaxed around her.

He further added that if he would get a girlfriend outside the House, he wishes for someone who is like Ahneeka.

Last night at the Live Show, Ebuka asked her how she felt about Angel, and the blush on her face was just too visible to ignore. But has he communicated his feelings towards her clearly? One can only wonder because it looks like there might be some mixed signals on Ahneeka’s side.

Pouring the Sauce of Love

Meanwhile, with Rico Swavey it’s a different story. He has continuously told her how he feels but it seems he’s constantly hitting a wall.

Even when they were paired together he did mention to her that he’s becoming drawn to her every day. He sat her down last night and told her ‘he’s available’ but Ahneeka brushed him off.

Could it be confusion or is she genuinely not into Rico Swavey and into Angel?

Upon entry, the Housemates had very firm views of themselves and what they would or wouldn’t do in the House and for the game. We thought it might be interesting to look at the biggest contradictions so far.

Let’s start with the most obvious contradiction of them all, Nina clearly stated that she has a serious boyfriend outside the House and she also said that she would never do anything with another guy unless Biggie told her to. Well, that being said, Nina was the first one to lock lips in the House with Miracle on day two – and in the Show! She wasted no time. Another Lady in the House who has contradicted herself in this manner is Cee-C, before entering she said she is completely unattached, she was not married, in a relationship or even in a friends with benefits situation. However, now that she is in the House, she has spoken at length about her supposed “best friend” outside the House and how much she misses him. In her interview before entering the House, BamBam said that she definitely did not want a relationship in the House, once in the House she spoke about how she could not date Teddy A as he has smoked and has tattoos, fast-forward a few weeks and they are inseparable .

Other Housemates who have contradicted themselves about their own personalities are Anto and Lolu. In her interview before entering the House, Anto said she cannot stand people who talk too much and that people who are always talking must just shut up. Now if you are a fan of Big Brother Naija, you will know that Anto LOVES a good talk, she loves to be heard and she can always be heard talking in the House. Lolu said in his interview that spontaneity is what describes him as a person but we have yet to see this side of him, he stands fast in his description of himself as a spontaneous person and maybe due to his two strikes he is just playing it safe but his personality and character are pretty much the antithesis of spontaneous.

Love can Help you Learn

Angel, who has always been very opinionated, made it clear that he was extremely stubborn in his personality and he doesn’t like people that push their pattern of thinking on him. Well, obviously love is transformative because Angel seems to be changing for the better thanks to Ahneeka. He has said that he has never met anyone who really wants to help him grow and improve as a person as much as Ahneeka does.

All the Housemates should go and watch their interview videos after Big Brother Naija is over and see how much they have changed. Just to think, we are not even halfway through.

Who do you think is the most contradictory Housemate of them all?

Tobi takes the Crown for the Third Time

Last night’s Live Show saw Cee-C, Miracle, Anto and Tobi were the ones who qualified to compete for this week’s HoH, all four are strong contenders but only one reigned supreme.

Last week was a winning one for Miracle who managed to accumulate every kind of Big Brother Naija accolade there was but it seems Tobi has come along and put an end to that spell. Tobi bowed gracefully after his fellow Housemates cheered him on in good faith, ever the sportsman.

Cee-C really seems like the kind of woman who would relish in the position of HoH, however, when her turn came to go, she literally put no effort into game. It was almost as if she didn’t care at all or as though she was trying to lose which is strange. She seemed slightly bitter at Tobi’s win, waltzing around the garden saying that “Biggie is boring“.

This will be the third HoH win for Tobi but this time it will actually count. His previous wins were cool but there were no Evictions, now, his HoH win will ensure his immunity from being Evicted on Sunday. Looks like the golden boy will be shining on our screens for at least another two weeks.

Do you think Tobi will make a good HoH third time around?

The Wager brief went into the House today and this time the Housemates could not choose how much they wanted to Wager – 100% it is because this is Biggie’s House.

This week’s theme is “arts and music” which came as a joy to the vibrant Housemates who relish in singing, dancing, acting and performing all the time. It is no secret that many of the Housemates are using Big Brother Naija as a platform to catapult their careers into stardom so this week is sure to be filled with entertainment.

The Housemates have been having problems working together, especially the ladies who always come to blows over the little things. Biggie states that in order to win this week’s Wager all the Housemates need to work together and that everything they do will count towards the win. Let’s hope that the likes of Cee-C, Ifu Ennada and Alex can put aside their differences for the greater good.

With all the Housemates being so artistically inclined, Biggie has much in store for them, although he is not giving much away right now, you can be sure that this week’s Tasks are going to be LIT!

Three-times Head of House winner Tobi was called in the Diary Room to give Biggie the names of the two pairs he and his partner Alex would Nominate. When he sat in the chair, Tobi asked if he only had to name two pairs, as if there was another name on his lips. Behind closed doors, a member of each pair was called into the room to deliver their verdicts. Nominations always seem to be a grueling exercise for as weeks went by, Housemates grew closer and fonder.  While some like Angel, Anto and Teddy A uttered their Nominees in one breath, others like BamBam, Lolu and Ifu had a much tougher time. Lolu shared that he was aware to have been Nominated every single time, while BamBam dreaded hearing Biggie’s questions and confessed with her eyes shut that she ‘hated it’.

Except from the pairs with immunity Tolex (Tobi and Alex) as HoH and Tena (Teddy A and Nina) as the favourite pair in the House, all the remaining pairs were Nominated. As the leaders, Biggie called upon Alex and Tobi to go to the glass booth and decide on who to Save and who to Replace. After forty-five seconds of keeping the House in suspense, the Ruling pair were back to announce their choice. Bluntly Tobi announced that he was Saving Bamco (BamBam and Rico) and replacing them with Ceelo, who joined Lifu (Leo and Ifu) and Gelah (Angel and Ahneeka) who are up for Eviction.

Perhaps tonight’s biggest surprise came when Tobi threw Cee-C under the bus by Nominating her pair for Eviction. Who would have thought that Tobi would dump her so quickly and so publicly?

With this week placed under a starry artistic sky, Biggie instructed Pairs to choose songs from a selected track list for their Task. Housemates were strongly advised to rehearse their acts as they will be interpreting famous hits to the whole BBNaija universe.

Music To My Heart

Overall, the challenge was warmly welcome as Housemates are known to enjoy belting out tunes and improvising dance moves. Alex did vent her frustration however that she didn’t feel confident having to interpret Nigeria’s highly acclaimed Davido’s Like Dat song as assigned by Biggie. As for Rico he warned everyone that he would just cry should his favorite artist, Nigerian sensation Tekno appear in the House. As it happens, Rico along with BamBam, Miracle and Anto, were given Tekno’s tracks Pana and Diana to work on. Cee-C and Lolu were tasked with developing a version of the Nigeria’s songstress Tiwa Savage’s All Over smashing record. Tena (Teddy A and Mina) together with Lifu (Leo and Ifu Ennada) also rose to the challenge of interpreting two of Nigerian pop star Wizkid’s most famous tunes Everytime and Final.

Biggie’s voice resonated again later in the lounge as a Ninja entered the House under Housemates amazed discovery of fourteen numbered boxes lined up in the glass room. Angel was chosen to pick a key from the Ninja and open the box with the corresponding number to the key. Inside each box were two outcomes: a reward and a punishment but more exciting was the token gift from Pepsi. But for now, Biggie wanted the Housemates to be aware that the winner of the task would be awarded an all-expenses paid VIP trip to attend the One Africa Music Fest in London. Housemates cheered up loudly upon hearing this, and Angel even tried a joke by translating Biggie’s sentences in Pidgin, to a general hilarity.