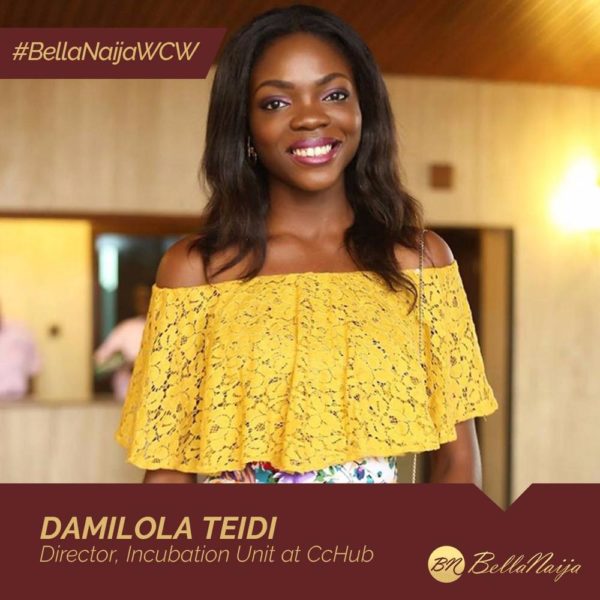 For our #BellaNaijaWCW feature today, we celebrate a disruptive entrepreneur, software developer and business analyst Damilola Teidi who is one of the notable figures in the Nigerian tech space.

Damilola co-founded GoMyWay Africa in 2015 to tackle the transportation crisis in Nigeria and the continent at large. The platform, a ride sharing service, connects private car owners with empty seats to passengers going the same way across Nigeria. In 2 years, the platform garnered over 10,000 registered members and more than 60,000 rides offered and rides shared across 16 states in Nigeria.

In January 2016, GoMyWay Africa was featured in the Global Opportunity Report 2016 as a transport pioneer and an opportunity leader. The report was published by DNV-GL, United Nations Global Impact and Monday Morning Global Institute. In late 2016, the platform was also selected by NITDA to represent Nigeria at the GITEX Technology Week.

Unfortunately, it shut down in October 2017 due to lack of further financial backing, after operating for two years.

Damilola put all that behind her and kept on pushing forward. In February 2018, she was announced as the Director, Incubation Unit at Co-creation Hub (CcHub), Nigeria’s foremost open living lab for (social) entrepreneurs, investors, tech companies and hackers.

Prior to GoMyWay Africa, Damilola had worked as a developer and business analyst, pre-incubation at CcHub.

She had worked as a software developer between 2011 and 2013 where she built an online shopping mall and a polytechnic’s web portal where prospective students can apply for exams, edit personal information, as well as check results.

Between 2013 and 2014, she worked at Kinetik Solutions Limited in London as a market research analyst. In 2014, while at at the University of Southampton, she worked as an intern in its project management office (iSolutions) where she was responsible for helping to ensure changes to the University’s computer-based systems undergo a formal test life-cycle.

She returned to Nigeria to take on her first role at CcHub in 2014.

She is a graduate of Information Technology from Eastern Mediterranean University, North Cyprus, and also has a Master’s Degree in Strategy and Innovation Management from University of Southampton, London.

Oprah pledges $500,000 to “March For Our Lives” Cause against Gun Violence