FG confirms release of 104 #DapchiGirls, 2 Others

The Federal Government has confirmed the release of 104 Dapchi girls abducted by Boko Haram insurgents.

110 girls had been abducted from the Government Girls Science and Technical College, Dapchi in Yobe State by Boko Haram insurgents.

Although 5 girls have been reported dead, the Federal Government is yet to confirm the news.

The whereabouts of the 1 girl left has also not been confirmed by the Federal Government.

In a Twitter thread, the Federal Government reiterated that no ransom was paid for the release of the girls.

Two additional children, a boy and girl, were also returned along with the Dapchi girls, although it is unclear when the 2 kids were abducted.

All of the returned children have been airlifted to Abuja, the federal Government said.

Minister of Information Lai Mohammed in a video also shared why the girls were released without ransom.

See the thread and the video below: 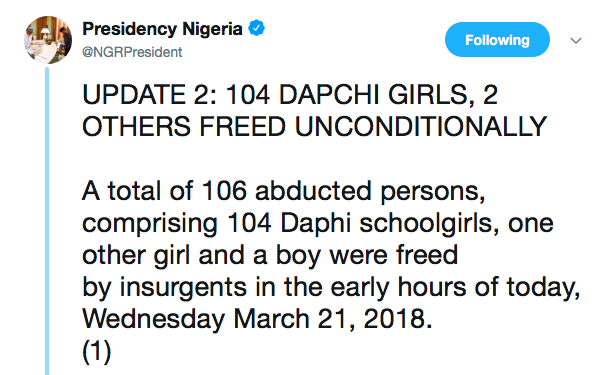 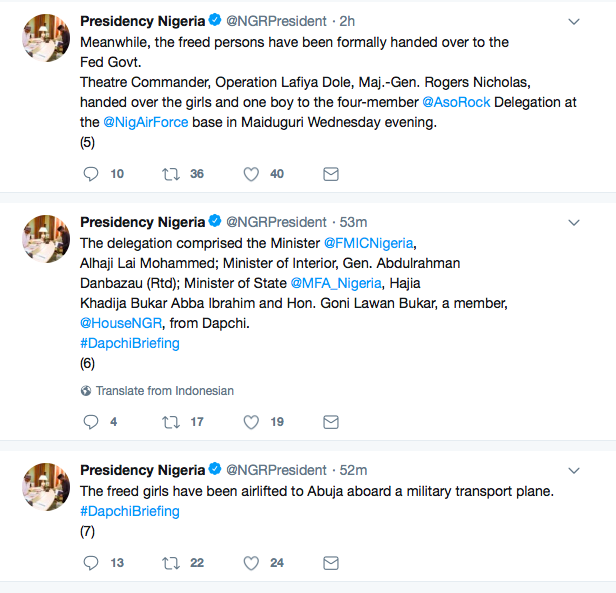 Q: How were the abductors able to
return the girls without military or police confrontation? #DapchiBriefing #DapchiGirlsAreBack

A: Minister of Information Alhaji Lai Mohammed provides the answer in this video: pic.twitter.com/Etc9gIISo8