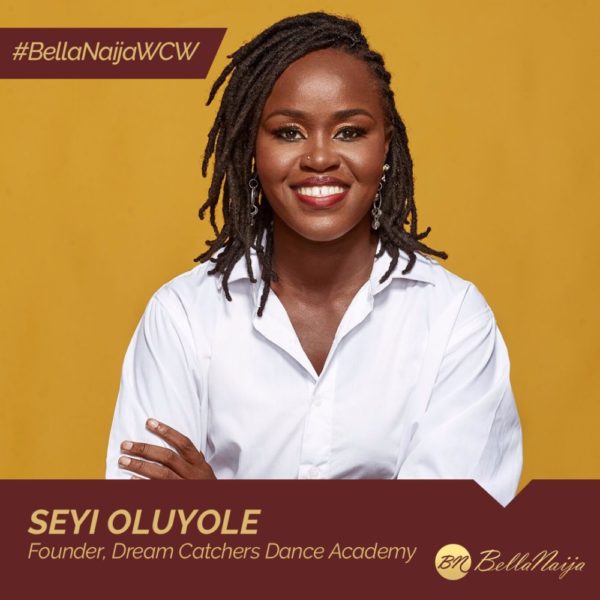 We all have our respective challenges and mountains to climb, and it’s not a crime to focus on surmounting your personal obstacles. But when one decides to look beyond themselves and focus on reaching out to others, helping them fight their battles, they deserve to be applauded.

Our #BellaNaijaWCW this week Seyi Oluyole, took this step while she was a teenager, and has been doing so for about a decade. Seyi and her family moved to Ebute-Metta, Lagos following about 3 years of them suffering some financial difficulties. While Seyi was still attending school, she discovered that in the area, “people lived in wooden house beside the beach. They did not have bathrooms and the children barely went to school. The highest achievement was JSS3 for the boys and the girls usually dropped out before JSS3 due to pregnancy.”

She wanted to changed things, so at 14, she started a dance group – Victorious Dancers – to take kids, some of which were her mates, others a year older, out of the streets and back to school. One year later, when star actress Omotola Jalade-Ekeinde was holding a fundraising concert in the area and Victorious Dancers were called to perform, Seyi told the kids that if they wanted to perform with the group, they’d have to go back to school, they agreed, and this was the beginning of Seyi’s work to getting indigent kids back to school.

Later on, she was able to convince her parents to have some of the kids come live with them and continue their education, with the consent of the kids’ parents. Majority of the kids were already living “on the streets”. Between 2008 and 2012, Seyi held outreach programs that provided these kids with school supplies. She also organised summer lessons.

Seyi left all behind and traveled to the United States, to begin a “new life,” but that didn’t last long as her passion for indigent kids made her pack her bags and return to the country. Once she got back, she began gathering indigent kids again, and later on, started a community learning centre for the kids.

Seyi founded the Dream Nurture Foundation, “a global relief, developmental organization committed to bringing life and hope to children in communities covered by poverty and despondency.” The organisation offers children educational opportunities while bringing out the best in them and engaging them in diverse range of human activities like sports, drama, and dance among others.

Under the Dream Nurture Foundation, is the kids dance group of the moment, Dream Catchers. The platform helps street kids by providing them with shelter, food, clothing and education, as well as empowering them through dance.

Seyi is using dance to take the kids out of the streets and into the school, and is teaching them that they stand a chance at succeeding with they are ready to put in the work; the money make from their performance is put back into their welfare.

Here’s a story of one of the kids, as told by Seyi on Twitter:

I’ll start with the story of the boy who used to clean gutter and wash plates for food sellers just so he could survive. He was 10 years old but was not in school. He was malnourished with lots of ring worm on his head. No one saw anything good in him.

He couldn’t speak English. His mother was tired of him and was willing to give him away. Then, I met him and I knew something could be made out of his life. I enrolled him into school and told him I’d teach him to dance but this boy was enjoying his street life too much…

He wasn’t really interested in school. His age also played a huge part. He was 10 and was going to be in primary One. then, I told him that if he stayed in dance, he’d get to go for events and at the events they’d give him rice and Chicken. ‘I go collect food?’ he asked me.

I said yes, and he immediately started coming to the dance class. Then I told him he had to return to school if he really wanted to be in the class. My boy decided to go back to school then and I had him live with me. Being in school was another problem. Communicating was hard.

I would find him crying on some nights. ‘I no know book’ he would say. Long story short, this my boy is now in JSS 1 and he is doing well. He can read and speak English. He does well in school and dances well too. He loves to dance but he knows School is first.

The Dream Catchers kids gained international recognition after they received a shoutout from pop star Rihanna, business mogul and hip hop icon Diddy, actor John Boyega, and supermodel Naomi Campbell, with Boyega and Campbell paying them a visit when they were in Nigeria.

Some of the children Seyi took into her home initially are either in the university or are graduates.

You would think that the above is all there is to Seyi, but that’s not all. She’s a screenwriter for popular TV series Tinsel and Hustle. Seun is a graduate of English and Literary studies from Covenant University.

We celebrate Seyi today, for living, not for herself alone, but for others, for not only giving indigent kids food and water, shelter and education, but also helping them navigate through life. Well done!

Here’s a video of some of the kids advocating that their mates stay in school, through dance:

Even though majority of these kids have been told they’ll never make it, Dance gives the dreams of these children validity and helps them know that irrespective of what they have been told by others, they stand a chance. pic.twitter.com/kbydWweR84