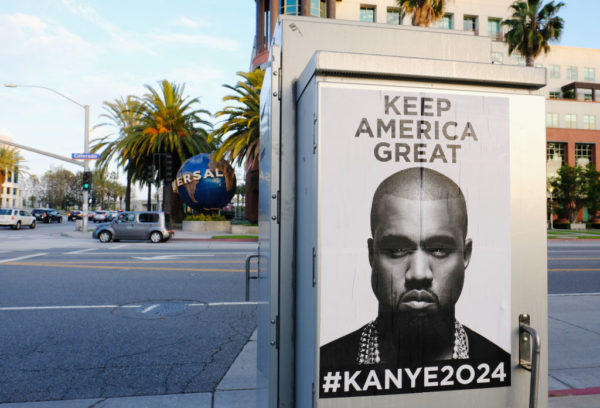 Remember the 2015 VMAs when Kanye West said he’d be running for president in 2020?

Well, forget that! Posters of the rapper/designer have popped up all over Chicago and Los Angeles saying Keep America Great.

West, who is currently on a roll on Twitter, declaring his support for Donald Trump and discussing his designs, has acknowledged the posters.

It seems though that they actually do not come from his camp.

The posters are said to be the work of anonymous street artists. In a statement released on thegatewaypundit, the artists said:

Kanye West tore a hole in the fabric of reality this weekend by recognizing the wisdom of YouTuber Candace Owens in the most publicly unfiltered way possible, via Twitter. Donald Trump has proved to all Americans that clarity of vision and the ability to persuade are much stronger assets for a President than political experience. Kanye appears to get this more than anyone else out there. Candace Owens is fighting for individual sovereignty, self-responsibility and being recognized by Kanye is a watershed moment for this country. We don’t know if Kanye wants to be President, Trump has proved that it creates a huge amount of enemies, but recognizing universal cultural truths is something that cultural icons are better at than politicians, it’s how they build success.