I don't think I'd be used to give Trump Legitimacy - Kim Kardashian on Meeting U.S President | WATCH 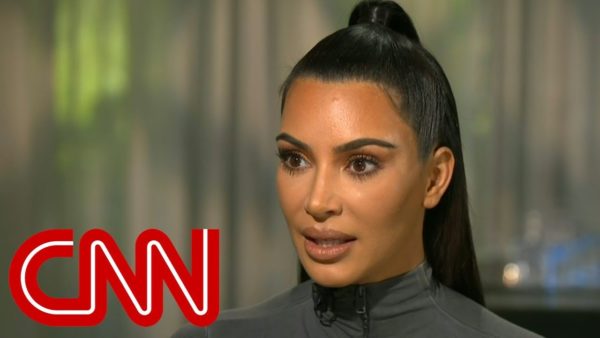 In her first interview since meeting President Donald Trump, reality tv star and beauty entrepreneur Kim Kardashian West speaks to CNN’s Van Jones, describing what the meeting was like.

Kim had met with Trump in the oval office to discuss prison reforms and the fate of Alice Johnson, a first-time drug offender who was sentenced to life imprisonment and had served 21 years of the sentence before her release this week after Trump commuted her sentence.

Kim, who has been passionate about getting Johnson out of prison for several months, said she called Ivanka Trump and told her she wanted a meeting with her dad. She said Ivanka connected her with her husband Jared Kushner, who is a Trump advisor.

On meeting the president, Kim said:

I have met him before, before he was the president a few times so it was a hug and [I] sat down and he was like, ‘Okay. So what’s going on? Why are we here?’ We started the meeting. I did take a second to say like ‘wait a minute, we’re in the oval office’.

Kim said she decided to lighten the mood, throwing a joke about her sister Khloe.

“He said, ‘Why are you here?’ I said, ‘Really I’m here because I want to know why you kicked Khloe off The Apprentice.’ It was a laugh and it was funny and then we got into business,” Kim said.

After the meeting, Trump called Kim to let her know he had reviewed the case and decided to commute Johnson’s sentence. Kim then called Alice to break the good news to her.

Kim also said she wasn’t using the whole story to get more publicity, saying she can literally walk out, and it’ll be a big story.

On comments that Trump may be using her to get legitimacy and that she may be in a campaign video, Kim said: “Kanye had already given him legitimacy in that way…. I don’t think I would be used. At the end of the day, he heard me out, we got the job done. Like what could he really use me for?”

There will be No Federal Public Holiday on June 12, 2018 – FG Clarifies

#PVCitizen: You can’t vote if you don’t get your PVC