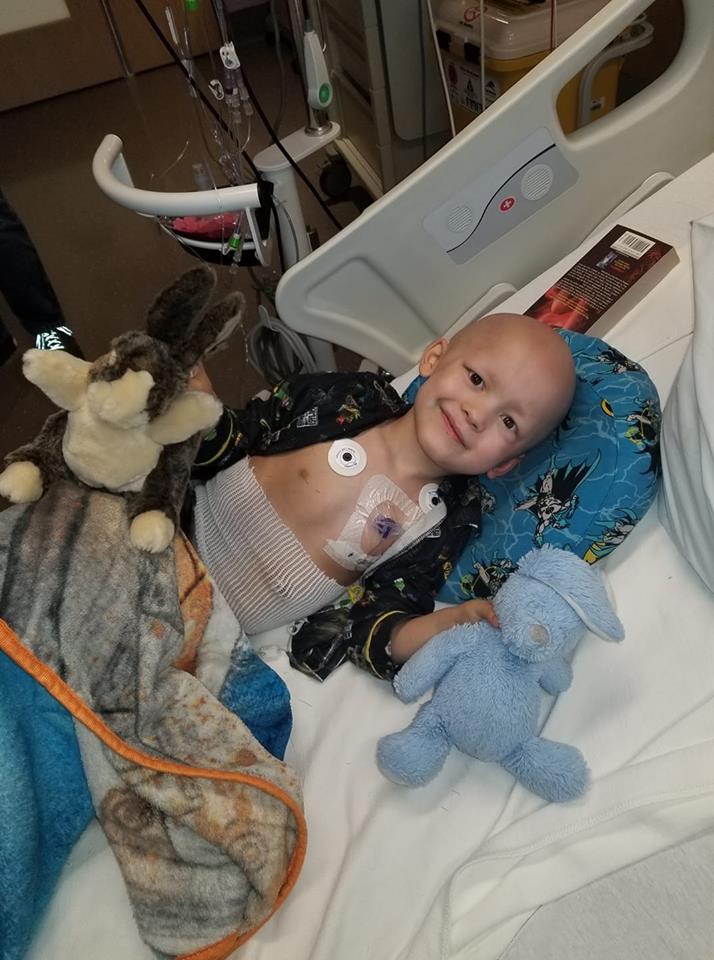 This is such a sad story, but the amazing thing about it is that 5-year old Garrett Matthias lived the last months of his life to the fullest.

Garrett suffered from stage 4 Alveolar Fusion Negative Rhabdomyosarcoma (ARMS) – a rare form of cancer that affected his temporal bone, cranial nerve and inner ear. While always not terminal, sadly Garrett’s case was and he lost the battle after fighting for nine months.

His cancer resisted treatment and continued to spread further until he passed.

We know Garrett lived his best life and his amazing obituary he wrote himself, with the help of his parents Emilie and Ryan Matthias, is proof.

My name is: Garrett Michael Boofias

My birthday is: I am 5 years old

My address is: I am a Bulldog!

My favorite color is: Blue….and Red and Black and Green

My favorite superhero is: Batman…and Thor, Iron Man, the Hulk and Cyborg

When I grow up: I’m going to be a professional boxer

My favorite people are:

•The grandparents with the new house (Fredric and Cheryl Krueger),

•The grandparents with the camper (Daniel and Nita Matthias),

•My cousins: Grady, ‘that guy I took down that one time’ (Luke), and London Marie,

•Those two guys, you know, my uncles (Kristopfer Krueger and James Taylor)

The things I love the most: Playing with my sister, my blue bunny, thrash metal, Legos, my daycare friends, Batman and when they put me to sleep before they access my port

Things I hate: Pants!, dirty stupid cancer, when they access my port, needles, and the monkey nose that smells like cherry farts…I do like the mint monkey nose like at Mayo Radiation and that one guy that helped me build Legos (Randy)

When I die: I am going to be a gorilla and throw poo at Daddy!

Burned or Buried: I want to be burned (like when Thor’s Mommy died) and made into a tree so I can live in it when I’m a gorilla

The family went on to thank the doctors, nurses, child life specialists, musicians, art therapists, and volunteers that worked tirelessly to cure Garrett of his cancer.

“… he never lost his sense of humor and loved to tease the doctors and nurses. From whoopy cushions and sneaking clothes pins on their clothes to ‘hazing’ the interns and new staff doctors, he was forever a prankster. Nothing caught people off guard as his response to ‘see ya later alligator’,” the obituary said.

A GoFundMe page was created for donations directly his family to cover for medical and other expenses.

Garrett’s parents will honor his final wishes by having a Celebration of Life on July 14th and a symbolic Asgardian burial ceremony and fireworks will be held just after sunset.

A private burial of Garrett’s ashes will be held at a later time once his parents figure out how the hell to get his ashes made into a tree and locate a nature preserve, so his tree resides in a protected area, the obituary said.