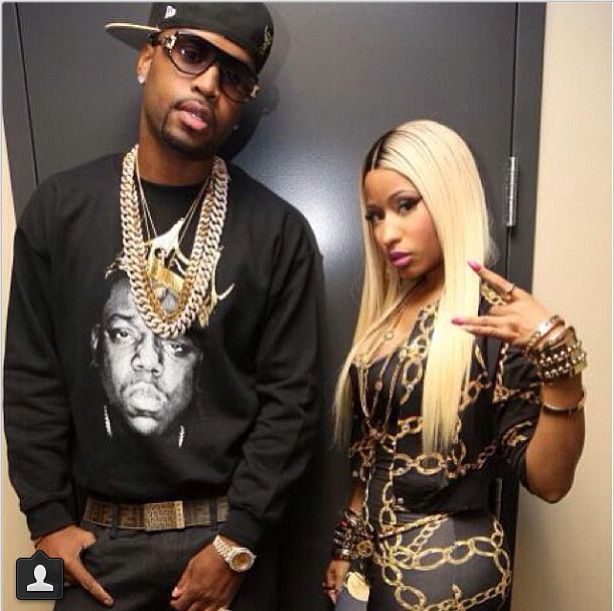 Rapper and ex boyfriend of Nicki Minaj, Safaree has accused her of assault during their 12-year relationship.

The rapper made this known during a Twitter war of words between the both of them.

In one tweet in a series of tweets, Safaree had said:

Remember the night you cut me and i almost died the police and ambulance had to take me out the crib on a stretcher and I had to lie and tell them I was trying to kill myself so they wouldn’t take you to jail. When things like that start happening more Than once it’s time to dip.

U stole my card & told me you thought it was an account with “free money” that I didn’t know about. On God. God will strike you down & more for lying. Ha! Stop saying u packed & left ! On Jesus u came to my house CRYING BEGGING to go w|me to Europe to the EMA’s. I said NO DUMMY

We know each other inside out. Everything there was for us. I didn’t use your card for prostitutes. We both didn’t trust each other. You did sh** I did sh**. You said you were messing with meek a few years b4 y’all got together and I’m not mad at that.

Nicki Minaj went on to say:

Sherika & I had a bet that soon as you knew meek was bout to come home your crawl back & ya did!

came to my house CRYING. JOYCE WAS THERE! My whole glam was there! Left who?!?! You gettin aired out on #QueenRadio too on Thursday! Apologize & STFU

I should’ve never paid for that gyatDamn hairline!!!! It fell back out cuz God don’t like ugly!!!! You used me but God had other plans!!!!!

1st off Me and tyga didn’t go to the same dr. We did it the same day. Diff doctors . Listen I don’t know if this has to do with 1st week sales but you need to finish your zen. And don’t talk about vh1 checks cuz the way you’re acting it’s like your auditioning to be on LHH

Btch you hit me & meek asking us to get your dick pic back from someone. Lol. You were playing with ur dick in the shower by urself with suds & shit. I have the email where u said you couldn’t pay ur electric bill & why you lied on me but go AWWFFF SIS!

At least y’all know I was trying to keep my nudes to myself now. Some1 was trying to leak my di%^ pic for years and ive been trying to stop it forever. But is this suppose to be your promo run? I’m flattered that you feel talking about me can help. I can’t believe ur still mad.

It’s about to be 5wholeee years. There’s no way I could hold on to something that long. You can front all you want you’re not happy. Don’t talk about my Big Dick swinging in the shower video no1 knows about that 1

The feud was said to have started after Nicki talked about their relationship during a radio interview:

Unless I really cared still I could not let the mention of someone’s name get me that riled up. That looks like some1 who either stlll cares or just holding on to a lot of hate towards someone. How many times have I said I never wrote ur raps? Nobody even talks about that anymore

You hold on to everything. your problem with Dj self is because me and him are so cool and nothing else. You have a problem with mona Scott because she put me on the show. let all that ish go. And now I stole your card? The 1 you gave me he pin for and had me doing ish with?

Towards the end it got toxic and I just packed up and left. I did things for spite and so did you. I don’t wish you bad and I don’t want us back together just like I’m sure you don’t. I don’t need you you don’t need me but we will always be linked in the public no matter what.

And you know what I still don’t have no hate for you cuz I’m happy in my own mind now. Enjoy your album dropping. And stop letting these ppl see you sweat. This ain’t you. You too big to act the way you be acting. No1 on ur level acts like that. Period

You wanna shut ppl up go on funk flex and rap. No1 goes to funk flex to do interviews. You Suppose to be up there doing this pic.twitter.com/IULrHDVwUJ

So what if @djenvy and @djself support me they support you to.. I’ve been places and they play your music allll the time. Stop letting your hate for me reflect on how you treat others. You hate me I love you and want you good but I don’t like you looking like your losing it!

How was I begging to go to Europe with you and you were in a full blown relationship towards the end of ours? I knew it a wrap. I still have the email when you hit me saying let’s spend Christmas together and work things out so please stop.

.. what in the zen sorcery is going here