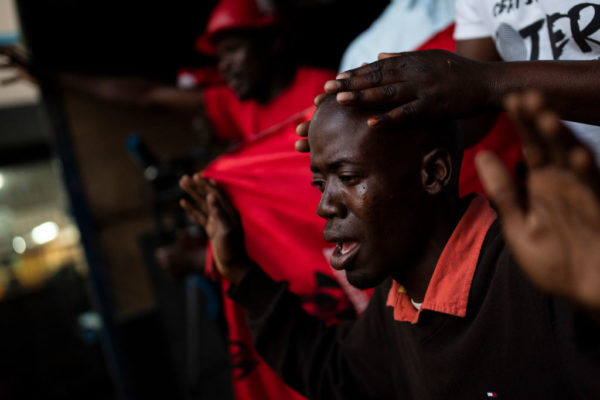 MDC supporters celebrate in the street outside the MDC Headquarters despite the election result as yet not been announced on July 31, 2018 in Harare, Zimbabwe. Zimbabweans went to the polls yesterday to vote for a new president in the first election since Robert Mugabe, who led the country for 37 years after it gained independence in 1980, was ousted from power last year. (Photo by Dan Kitwood/Getty Images)

Zimbabweans went out en masse on Tuesday to vote in their first presidential elections since the 37-year rule of Robert Mugabe.

The post-election protest has however turned dark as 3 people have been reported dead.

According to BBC, 3 people have been killed by Zimbabwe’s military troops after they opened fire on rioting opposition supporters.

The supporters allege that their votes were stolen, accusing the leading party Zanu-PF of rigging the elections.

The opposition party MDC Alliance has described the shooting as reminiscent of the “dark days” of Mugabe’s rule.

President and candidate of Zanu-PF Emmerson Mnangagwa, however, said the opposition party was responsible for the violence.

See videos of the riot

This is the current situation in my country after what we thought was a peaceful election. I'm angry, devastated, sad and heartbroken. The other footage and images are far too gory for me to even look at. No candidate, party or election is worth dying for!