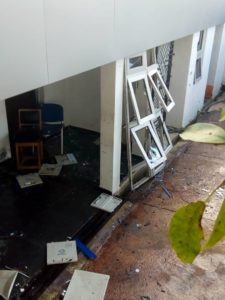 According to The Nation, the robbers, seven in number, stormed the bank at about 5.50pm and shot into the air continuously during the 20-minutes operation.

A security guard and a staff were killed during the attack.

It is unclear if the robbers eventually took money away from the bank.

The robbers would have done more havoc than they did, but for prompt action taken by our men. There was exchange of gunshots between the bandits and our personnel. They tried their best to manage the situation.

The command is stepping up its intelligence gathering skill and operation. As a temporary measure, we are going to deploy more men in banks to make the place safe for staff and customers.

If you are on ground in Igede now, more men have been deployed, particularly the mobile police unit. We are doing same across the state.

As we speak, our Criminal Investigation Bureau (CIB) and State Intelligence Investigation Department (SIID) have drafted their men for intelligence gathering while mobile policemen are on road and other critical areas.

Ikechukwu added that the robbers fled the scene and made their way into a forest where officers are currently in hunting for them.

BN Collection To Closet | Zainab Balogun In The Muse Factory