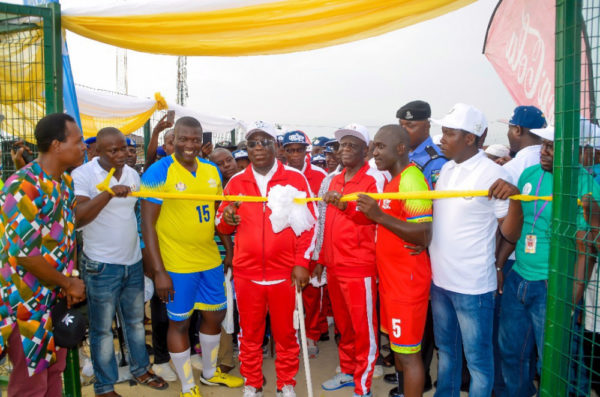 The cutting of Ribbon by His Royal Majesty, Oba Tijani Adetunji Akinloye, JP, OON, Sateru ӏӏ, Ojomu of Ajiranland (middle) during the commissioning of the stadium built and donated by Victoria Crest Homes Limited.

The 2018 Oba’s Cup which kicked off on Saturday, September 22nd came to an exciting climax on Monday, October 22nd as Oba Tijani Adetunji Akinloye, JP, OON, Sateru ӏӏ, Ojomu of Ajiranland congratulates all winners and participating teams in the competition. 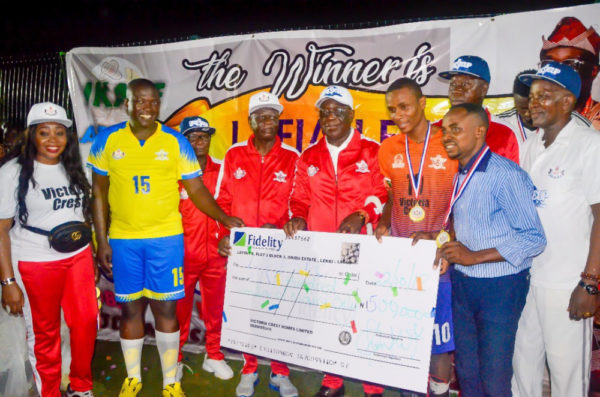 Photo shows His Royal Majesty, Oba Tijani Adetunji Akinloye, JP, OON, Sateru ӏӏ, Ojomu of Ajiranland (middle) presenting a cheque of Five Hundred Thousand Naira to the captain and coach of Lafiaji Football Club, winners of the 2018 Oba’s Cup during the final match of the competition on Monday

His Royal Majesty, Oba Tijani Adetunji Akinloye, JP, OON, Sateru ӏӏ, Ojomu of Ajiranland also extended his show of sportsmanship by congratulating all the winners and competing teams for their display of sportsmanship by competing in harmony and love during the one month tournament period. “I congratulate all winners and competing teams for displaying the spirit of oneness, peace, togetherness, unity, and love throughout the period. Indeed, this is what football preaches and this tournament has helped to instill these virtues in our youths,” he said.

The sponsor, Dr. Kennedy Okonkwo, stated that it was part of the company’s corporate social responsibility to throw its weight behind the football tournament to encourage the spirit of sportsmanship among the youths in the area. “The games were to celebrate our Royal Father and we have achieved this by competing as brothers in the tournament through our display of sportsmanship,” he said.

All participating teams showered encomiums on the sponsor, Dr. Kennedy Okonkwo for supporting the youths through sports by building and donating the new Ajiran stadium complete with flood lights to the community. They also prayed for Oba Akinloye, whose Coronation Anniversary has given them the platform to showcase their skills in the spirit of celebration. 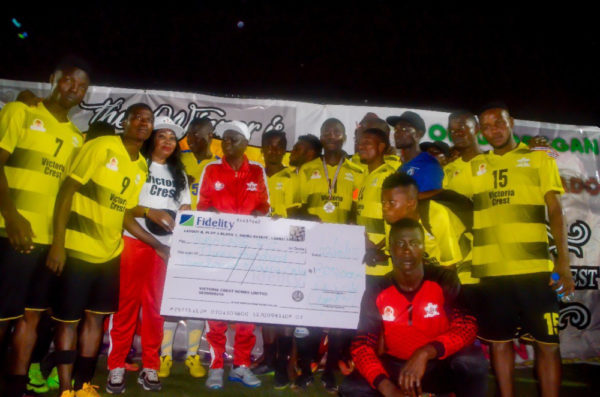 Presentation of Three Hundred Thousand Naira cheque to the captain and team members of Tobalase Football Club, second place winners of the 2018 Oba’s Cup, during the final match of the competition on Monday.

32 games were played by 16 teams during the period and each team got a participation fee of Fifty Thousand Naira each in addition to their respective football jerseys, all provided by the sponsors, Victoria Crest Homes Limited, a real estate company providing affordable housing solutions in Lagos, Nigeria.