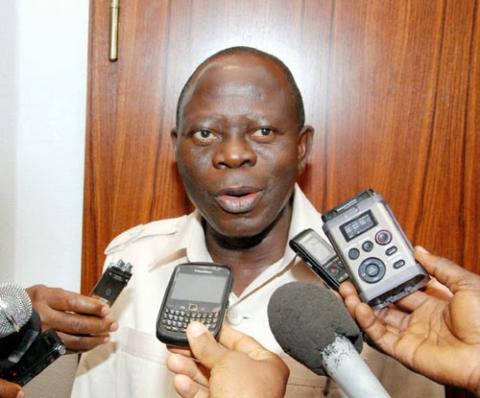 The All Progressives Congress (APC) national chairman Adams Oshiomhole has said that the party will field candidates for elections in the state, as against the Independent National Electoral Commission (INEC) ban.

According to Premium Times, Oshiomhole in a letter to the electoral umpire, dated October 10th, said:

Be informed that in spirit of due compliance with the law, we affirm we shall indeed be presenting candidates for governorship, National Assembly and state house of assembly in Zamfara state of the general elections before the deadline of such names which has been fixed by your commission on October 18 and in line with section 87 (6) of the electoral act 2010 as amended. If you raise further objection after you receive our lists of candidates we shall be glad to clarify them.

Vanguard reports that INEC, in a letter signed by its acting secretary Okechukwu Ndeche, had banned the party from contesting in all elections in the state except the presidential poll for failure to conduct its primaries before the October 7th deadline.

“Consequently, based on the provisions of Sections 87 and 31 of the Electoral Act 2010 (as amended), the Commission does not expect that your party will submit names of any candidate from Zamfara State. For clarity, our position therefore is that the All Progressives Congrats APC will not be fielding candidates for the Governorship. National Assembly and State Assembly elections in Zamfara State for the 2019 General elections. Please accept the assurances of the Commission’s highest regards,” the letter read in part.

Oshiomhole insisted that primaries were conducted in the state before the deadline, adding that voting is not the only way to produce a candidate.

Therefore, the claim in your letter under reference that “no primaries were conducted by your party in the state, not with standing that our officials were fully mobilised and deployed.” could only be referring to their observation that actual voting did not take place, which is not the only mode prescribed for producing candidates in the electoral act, 2010 as amended. We affirm that indeed primaries took place in Zamfara state.

Please also refer to the INEC’s timetable and schedule of activities for the 2019 general election released by the commission on the 9th January 2018. by that timetable all political parties are expected to submit a list of their candidates on or before 18th of October 2018. After exhausting all internal procedures for appeals arising out of the congress.

As a party, we are in the process of exhausting those internal procedures before forwarding the names of our candidates to you. We are perplexed that you did not wait for us to submit the names of our candidates in Zamfara before raising your observation in your letter under reference. This is more so when we received no correspondence from the commission at least to inquire from our party the true state of affairs in Zamfara state in the spirit of fair hearing, before making haste in your letter.

Kindly find attached the comprehensive report from the Zamfara Electoral Committee of the APC and signed by all the members on the conduct of the primary elections for the Zamfara State held between 6th and 7th October 2018.

The summary of the report, as you will find is that following the high level of friction, disagreements and threatened violence by various political camps before the primaries, all the aspirants met at City King Hotel, Gusau to find truce.

After hours of intense horse-trading a consensus was reached within the spirit and context of the electoral act and the constitution of our party on the basis of which a list was produced which was confirmed/affirmed by all delegates present. This was done in strict compliance with section 87 (6) of the electoral act 2010 (as amended).

The APC in Zamfara state has been in crisis over disagreement between Governor Abdulaziz Yari and Senator Kabiru Marafa.

Yari is running for Senate and Marafa is running for Governor, but Yari wants his Commissioner for Finance, Mukhtar Idris, to succeed him. This led to conduct of parallel primaries in the state.

Why Fayemi “should help me pay” Workers’ Salary Arrears – Fayose

No Groom, One Bride, One Goal… Here’s Why this 32-Year Old Ugandan Woman got Married to herself