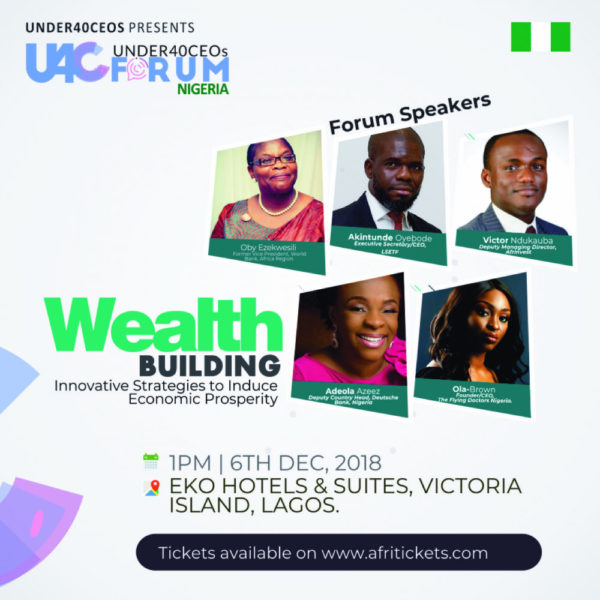 Young entrepreneurs and business leaders from across the African continent will gather in Lagos for the 3rd edition of the Under 40 CEOs Forum holding at Eko Hotels and Suites, Victoria Island, on Thursday, December 6th, 2018.

Under 40 CEOs Forum (a live interactive event) is an extension of the Under 40 CEOs Television Show. The forum offers a unique opportunity for current and aspiring CEOs to meet, share ideas and collaborate to create economic value across the continent.

The 2018 forum will also include the launch of the book “Under 40 CEOs: How We Made It In Africa – Volume 1.” It is a 220-page book featuring insights from the stories of 52 young African business leaders from Nigeria, Ghana and South Africa.

According to FAB: “About 500 young aspiring business leaders are billed to attend the event, and an additional 10,000 young people will be joining the conversation via Facebook live on www.facebook.com/under40ceosafrica and also on Twitter.”

Like previous editions, 2018 Under 40 CEOs Forum will feature an array of notable speakers, including established professionals and technocrats, as well as emerging young business leaders from both the public and the private sector:

Under 40 CEOs launched on TVC Entertainment and TVC News on October 9th, 2015 and subsequently launched on Silverbird Television Network on January 13th, 2017 and has spotlighted inspiring young business leaders aged 40 and under from Nigeria, Ghana, and South Africa.

With over 87 episodes till date, and serial entrepreneur, Familusi Akin Babajide (Mr. FAB), as the host, Under 40 CEOs has since gone on to inspire and motivate millions of would-be young business leaders across Africa to take action and join in the rebuilding and re-shaping of the African continent.