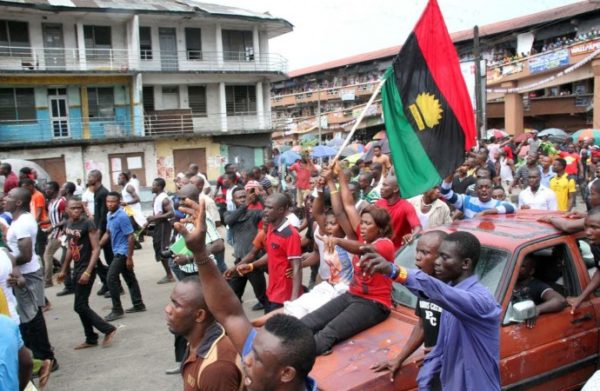 Members of the Biafra Zionists Federation (BZF) have threatened to commit mass suicide due to their leader Benjamin Onwuka‘s arrest in August.

Punch reports that Onwuka and other members of the group were arrested August 20 during a protest where they tried to “occupy” the Enugu State House.

The group had attempted declaring the independence of the Republic of Biafra.

Months later, however, the group has said the whereabouts of their leader is unknown, and he has not been charged to court.

We want to further inform Nigerians and the international community over the unlawful detention of our leader,  Benjamin Onwuka,  by the DSS.

It is now over two months and they have refused to charge him to court, contrary to the provisions of Nigeria’s constitution, which says nobody should be detained beyond 24 hours.

More worrisome is the silence of the security agencies, the South-East governors and Ohanaeze Ndigbo, we are beginning to think that there is a collaboration among them.

We are issuing a seven-day ultimatum, after which we have no option but to commit suicide.

We shall occupy all the roads in the South-East and either get crushed by vehicles or have ourselves killed by security forces.

We are drawing the attention of the international community, especially the United Nations, the Amnesty International, the United States and Israel to the oppressive tendencies of the Federal Government of Nigeria.

We have our right to self-determination as provided for in all international treaties and we are not ready to sacrifice it.